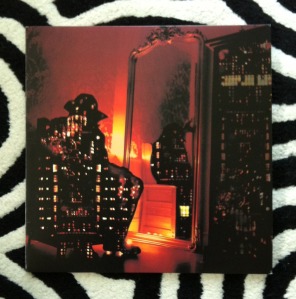 Tracks: Side A: 1) I Light The Lamp And Sit Down, 2) The Good Dead, 3) The People Without Tears, 4) Death Was A Bird, 5) Villages Of The Black Earth, 6) A Secret It Remains, 7) Another Light; Side B: 1) Workbench Atheist, 2) Demons In The Birchwood, 3) Farewell, Pale Corpse Of Many Sins, 4) The Immortalisation Commission, 5) We Looked For You For 52 Years, 6) Massed Bands And Megaphones

Ask a person cold about a particular moment in time and the recall on specifics might not be immediate or complete, but drop a needle on an LP or press play on a CD and the instant the music starts (even if it has been unheard for 30+ years) that same person’s recollection of a memory could be lucid, with the place, time and circumstances remembered in vivid detail.  Music is often a key that unlocks chambers in a memory palace.  While not necessarily as far back as 30 years, there are moments while listening to Kosloff Mansion that visions of the past coalesce and the aura of the album further enhances that experience.  Perhaps Tom Lecky had different intentions from my own experience for the inspiration of his fourth album, but that’s the power of music when combined with synapses, dendrites, proteins and whatever…

I often associate the works of HH’s with layered compositions for acoustic and electric guitar (as in the albums The Union or A Hem of Evening), but this LP is mostly rooted in solo piano with production and treatments by collaborator Tim Noble (of  The Lowland Hundred).  It’s hard to know where Noble’s contributions specifically appear, but I think of Lecky’s work as being mostly austere, without apparent structure at times, although intricately layered (some juxtapositions being left to chance).  I was fortunate to have ordered this LP early enough to obtain a copy signed by Lecky and Noble, along with a hand written short poem by TL.

Kosloff Mansion starts gently, like the rising Sun with beams of light reaching into the morning, or rather, a candle’s flame penetrating the darkness.  It could be an unhurried day or evening in a cabin in the woods, just sitting contemplating nothing (or everything) and listening without distraction—the types of moments of which we need more.  Briefly, a storm interrupts in The Good Dead and this triggers the vision of a very late night deep in the Adirondacks (of New York) with lightning and thunder that a (then) very young son wanted to end, but I wanted (privately) to continue, to hear the storm echoing through the mountains.  With assurances that the storm was increasingly distant, there was comfort enough for the younger to sleep and so the elder could continue listening and pondering that particular night before a loon emerged and greeted the dawn.

Instrumentation sometimes changes from solo piano to bells, or perhaps it’s a celeste, but they fit while shifting with the breezes, moonlight and stars reflecting in the lake of the vision.  A Secret It Remains blends liquid and tones before landing in the austerity of Another Light with only hints of ominous strings rolling in on an imaginary tide of a lurking then emerging spirit…before fading.

Workbench Atheist seems to be more of the morning; soft music with a light rain or is it the creaking of an ancient wood floor?  Demons In The Birchwood is a darker, but livelier spirit and the celeste returns with a deeper Leslie-esque treatment, before merging into a wraith-like Farewell, Pale Corpse Of Many Sins, which at times is unsettling yet ironically at peace.  A reverie is freed to peregrinate in The Immortalisation Commission and it builds to a crescendo and then gently disperses.  There is a firm perseverance in We Looked For You For 52 Years, a feeling of reverence is also present.   Massed Bands And Megaphones punctuates Kosloff Mansion with a blend of a celebratory whimsy and sounds reminiscent of fireworks echoing in the distance.

At times Kosloff Mansion is mysterious, yet halcyon moments come forth and while different in sound and instrumentation from his previous works, it’s very much rooted in what I have come to appreciate in Lecky’s work—a really brilliant and different kind of music experience.

Added bonus! Hallock Hill live on WFMU, along with Tim Noble (HH segment starts at about 30:00, but enjoy the entire show!): http://wfmu.org/playlists/shows/55533