I enjoy listening to the Quiet Design podcasts with Cory Allen and Mike Vernusky (available free through iTunes).  They discuss observations on art, the world around, how music affects them and their sources of inspiration as well as the musicians and artists they interview, to date: Lawrence English, Simon Scott, Duane Pitre, Taylor Deupree, Sun Hammer, Wide Sky and others.  The topics are wide-ranging, often very entertaining and thought provoking.  I also appreciate the reflective consideration that Cory Allen brings to the development of his work, and to his experimentation with instrumentation (extant and invented).

From the first sedate piano note of The Great Order, to the almost shy conversation between guitar, vibraphone, cello, and double bass, there is a respectful and somber discipline, a regimen to this largo in two movements.  It is evident that there is a prescribed yet restrained foundation to this all-acoustic instrumental work.  This is an album about relationships and exploration: the musicians to their instruments, the instruments with each other and how the sounds sustain and resonate both in the recording and ultimately in the listening space (or headphones) and the ears of the listener.  No one instrument dominates, and it’s as much about the spaces between the music as it is about the sound.  The first movement is somewhat hushed, and the second movement has a slightly increased density of statement-response and layering among the instruments.  This is an album that also cleanses the mind and encourages contemplation.  The recording has a clarity and live presence that feels as if one is sitting in the room with the musicians, making it all the more intimate.

The album art and design are by Cory Allen, who has done an impeccable job with the entire package (the covers printed by Stumptown Printers in Portland, Oregon).  The limited edition LP is pressed in translucent clear vinyl.  Also, in conjunction with the release of The Great Order, Cory Allen has issued an LP version of his serene, beautiful and introspective album Pearls (from late 2010).  The first 100 copies of Pearls are pressed in white vinyl and 400 copies in black vinyl.  For a limited time, both LPs can be purchased at a special price from the Quiet Design website.  I’m also looking forward to Cory Allen’s ongoing experiments with his recently created multi-stringed instrument (a sound sample is below).

I need some warmth on these cold winter days… 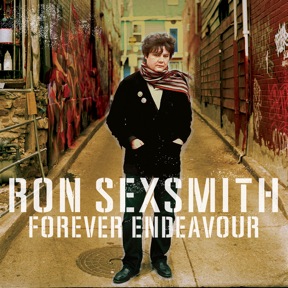 I love Ron’s work (another thoughtful Canadian songwriter—imagine that?!).  He writes such great songs.  My problem with his work, at times, is that sometimes his songs are just too sad, but Ron has a gift for making a sad song curiously uplifting, like Michael and His Dad from his last album Long Player Late Bloomer.  I started listening to Ron’s work in 1997 with his third album Other Songs (produced by Mitchell Froom and Tchad Blake—coincidentally Froom produced Suzanne Vega’s Nine Objects of Desire the previous year, another favorite album of mine).  Forever Endeavour is sparsely arranged, but strings, horn, percussion, pedal steel or electric bass are right there when they’re needed.  Other than that, the songs are Ron’s voice, and his acoustic guitar.  He has a gift for wordplay and expressing emotions with a deft efficiency that flow so naturally with his melodies.  Some songs on Forever Endeavour are ironically upbeat, like Nowhere Is and Snake Road—in a sense, keeping the faith.

The CD has two bonus tracks (songs written with Don Black and recorded by Don Kerr), Life After A Broken Heart and Autumn Light, and they are just plain gorgeous additions to this album.

This is Lorna’s third album on the Words On Music label.  The collective from Nottingham, UK creates dreamy contemplative songs with shy vocals and delicate harmonies.  I’ve read of some comparisons to Yo La Tenga, but Lorna’s instrumentation tends to be more complex, and chamber-like at times.  I think that this is their most direct album of the three for Words On Music—their sound is more confident, but they haven’t lost the softness and (at times) melancholy of their lyrics.  I think the strongest songs on this collection are As She Goes By, Old Shanklin Sunset and Mina and Marco (with a delightful melodic phrase sample borrowed from composer Edward Elgar).

A woman after my own heart—part record store owner, part musician; for many years, Daphne has been part of the New London, Connecticut-based band Raise The Rent.  Moxie is the first of two releases (the forthcoming being Frost), and is a sultry collection of songs of the (only mildly) lurid backstreets of her imagination (with the added bonus of occasional Mellotron accompaniment!).  There are shades of the cheekiness of the Squirrel Nut Zippers and the “heat” of mid-1970s Maria Muldaur in this well-produced album.  I have an idea for what to expect from Frost—counterpoint!

Sainte Anne is the latest EP from the Paris-based Australian quartet known as Heligoland.  Their work in the last few releases has come under the wispy spell of producer and musician Robin Guthrie (who also plays occasional keyboards and bass), so it was only natural that I try their work.  My favorite tracks on this EP are Sleepless and 22 Miles—peaceful ethereal guitar and bass balanced with gently pulsing drums and Karen Vogt’s warm and full vocals (channeling, at times, the sound of Christine McVie with a bit of vibrato).  Other band members are Dave Olliffe (guitars and keyboards), Steve Wheeler (bass) and new member Antti Mäkinen (drums and percussion).  Their previous albums and EPs include: Bethmale (recorded in 2010 and released in 2012), All Your Ships Are White (2010) and A Street Between Us (2006).

Corazón from their album All Your Ships Are White

And even more wonderfully creative releases from the Flau label in Japan…  I can’t possibly buy them all, so one must be…somewhat…selective.

I have thoroughly enjoyed the various releases by The Boats (Craig Tattersall and Andrew Hargreaves with Danny Norbury, Chris Stewart and others).  Our Small Ideas is a re-release and enhancement of an original 2008 CD-R.  Contained in this work are the often quirky and sometimes fragile and nascent threads of pieces to be released later (and some are quite recognizable).  This album is not unlike the approach of CD #1 of Tape Loop Orchestra’s The Words On My Lips Is Your Name/The Burnley Brass Band Plays On In My Heart.

Sound samples are here (since The Boats seem to eschew Soundcloud): http://www.flau.jp/releases/r09.html

This is a solo project of Berlin-based vibraphonist Masayoshi Fujita, a light blend of acoustic instrumentation with a tranquil late night aura of electronics and subtlest of glitchy rhythms.

Stories is an album of solo acoustic vibraphone works (with occasional violin and cello).  Whether struck gently (as in Snow Storm) or bowed (as in Cloud), Fujita paints vivid, yet tender sound pictures.  Some pieces are rhythmically playful, and could form the foundations for musical conversations (much like those between Bill Bruford and Michiel Borstlap on their album Every Step A Dance, Every Word A Song).  This is an appropriate soundtrack for gently falling snow.  The album is beautifully mastered by Nils Frahm.

Graham Gouldman has been writing songs since the days of The Yardbirds (For Your Love), and many others like Wayne Fontana and the Mindbenders, before formally crossing paths with Eric Stewart, Lol Creme and Kevin Godley (Hotlegs) who later became 10cc with a long string of albums with sharp, witty and often sardonic songs.  Love And Work is an album of twelve beautifully crafted and wide-ranging songs.

The album dedicated to the memory of Andrew Gold, and the song Daylight is about Andrew.  They worked together as the duo Wax and earlier on some of 10cc’s later albums.

An Immensity Merely To Save Life – Part 4 Black Vinyl Series 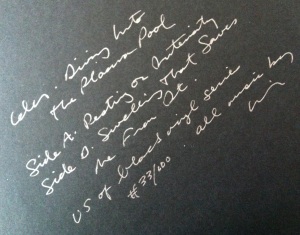 Insert for Diving Into The Plasma Pool

I almost missed them entirely, but something appeared on my screen in late January, and within 5 minutes I was transported to a perfect sunny day, in the middle of a gently rolling sea, on a reach in a sailboat, and to a sonic warmth that dissolved the doldrums of my winter reality.  It was Diving Into The Plasma Pool, the latest (and I think last) of the five part Black Vinyl Series by Celer (Will Long).  For whatever reason, I missed parts 1 through 3, but as soon as I heard a sample from Resting On Intensity (Side A), I looked to see if there were other LPs still offered—and indeed, Part 4 was (and is) still available.  Part 4, An Immensity Merely To Save Life starts a bit darker with Of My Complaisance (Side A) and then softens with Gusts of Hysterical Petulance (Side B). 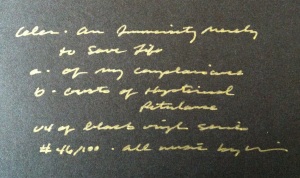 Insert for An Immensity Merely To Save Life

The subtle enmeshed loops of Diving Into The Plasma Pool flow like Debussy’s Nuages and yearn (although more gently) like Nicholas Szczepanik’s Please Stop Loving Me—they are waves that crest, hold onto a pleasurable edge and then dissolve.  The chords and sounds are right in my sweet-spot.  But enough from me; just listen—better yet, buy one or both of them.  They’re gorgeous, full and resonant—simply magical.