It’s hard for me to believe that it was 10 years ago John Hackett released his last “electric” album Checking Out of London, a collaboration with lyricist Nick Clabburn, brother Steve Hackett, keyboardist Nick Magnus and guest vocalist Tony Patterson.  COoL was largely an album of contemplation of modern realities with a fairly narrow and relatively calm emotional range (the song Ego & Id being the exception).  Since COol John Hackett has released a collection of acoustic collaborations (see photo, I’m sure some are missing from my collection) and a live album with Nick Magnus in 2010, in addition to other session work with Magnus and others. 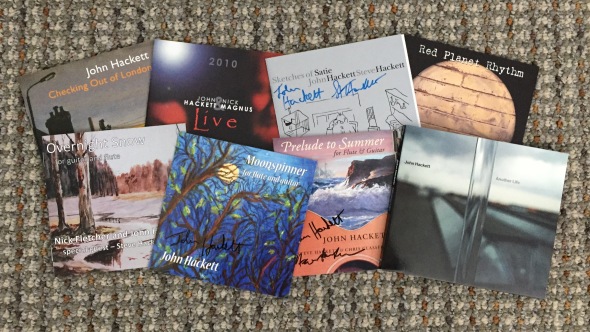 In contrast, Another Life exists in a darker realm, and is cathartic, but also treats the subject matter, at times, with sonic irony—where the music belies the lyrics, almost mocking the hopelessness or anger, reveling in the pain, getting to an even darker place perhaps in the hope to emerge in a better elsewhere.  It’s not, however, necessarily a nihilist point of view.  I also hesitate to say that Another Life is a concept album, but there is a tightly knit theme throughout.

The title track opens the album aggressively and builds to a primal scream of sorts.  After listening to it a few times, I detected a structural pattern similar to the verse and refrain comparing it to In The Court of the Crimson King, including the point where John Hackett’s flute enters…coincidental or an homage?  In Look Up “Everyone is changing…” and it is reminiscent of the sound of the change The Byrds sang of in the late 1960s (and distinctive opening chords like ELO’s 10538 Overture).  The song is embedded with foreboding, but it has a driving energy of what I characterize as hope in the words “Look up and feel the light…”  Poison Town is one of the examples of where the music seems to contradict the message of the lyrics, it has a sort of chill-vibe with the soft keyboards and wah-wah treatment of the guitar…kind of swaying and comforted in the darkness of thought.  White Lines delves into frustration, with the Doppler-Effect sound and motion of vehicles speeding past on a highway, following the road into a vanished point in the distance…a destination never reached on an endless journey.

Life In Reverse on one hand is bleak, but there is a sense of optimism and beauty in the music—the chord shifts, layered chorus vocals and the gorgeous bridge from John Hackett’s flute (the passage “This rented room…This rented life…” with the chord bends and vocals is powerful).  Another example of the sharp contrast of the message in the lyrics and music is Burnt Down Trees, as if one is mocking the other.  The music is funky, rhythmic with ripping guitar solos from Steve Hackett, almost as if the music is laughing at reality while the streets burn; like the conditions are so bad, one needs comic relief or escapism.  Ant Phillips is a guest instrumentalist on Satellite (12 string guitar and harpsichord).  A song of conflicted feelings, opens with Steve Hackett on harmonica, with flowing chords and harmonies from the vocals and guitars.  Stark truth and minimal sentimentality “Say how you feel…I just want to hear you try…”  By the time Phillips’ rich sounding harpsichord enters, the difficulties of reality return—a very emotional piece, one that cannot be played loud enough to hear all the depth to the layers.  Holding onto beauty in the face of despair.

Forest, in a way harkens back, in sound and instrumentation, to many of the songs on COoL.  Reflection and self-examination, pondering how things could have gone, yet living with how they turned out.  Magazine is the one piece on the album where Nick Magnus is credited as a songwriter along with Hackett and Clabburn.  It’s another in the canon of gentle and contemplative songs, somewhat like the early instrumental piece by brother Steve Hammer In The Sand, although it passes through a couple of grander orchestral codas.  Rain is perhaps a relationship gone bad (the actual inspiration could be completely different!) and in this the music and lyrics are aligned—the twisting sadness of the minor chords and the forceful vocal refrain, punctuated by Steve’s sustained growling solos.

There was something about Actors that sounded familiar to me…the lyrics seemed to have a parallel elsewhere, and sure enough, portions of the lyrics were used in the Squackett (Steve Hackett and Chris Squire) song Divided Self (a marvelous song, by the way—lyrics also by Clabburn).  It’s a song of internal conflict—“Two tongues speaking in my head…” with a curious I Am The Walrus-esque link in the middle before the first guitar solo and vocal choruses.  Another Day, Another Night has some sounds of hope with its upbeat rhythm and instrumentation, and is where the message is delivered to whatever is causing the feelings of darkness to move on—kind of an ultimatum with signs of optimism.

And then…the Poison Town Reprise…and a bit of the darkness returns.

Fear not the subject, just get lost in the music—I certainly have…as I click REPLAY.