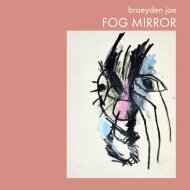 With respect to music genres, where does ambient end and drone begin?  Can music help to offer a refuge, focus the mind or distract it?  Fog Mirror flirts with all of these possibilities.  I admit to being puzzled at times on why some music needs to be so heavily shrouded with the melodic aspects pushed nearly out of reach, yet unexpected benefits can occur, like vanquishing a worrying thought, eroding it with sound.  Admittedly, I don’t always understand the approach, but I appreciate the intent, especially if the quality of the recording is full and not bleached-out into an unpleasant monophonic haze.

Remember the moment in the original Star Trek pilot episode The Cage when Captain Pike and Mr. Spock touched a plant on the forbidden planet Talos IV?  The layers of sounds emanating from the alien plants and the remaining ambient atmosphere were revealed…Spock even smiled.  Never seen it?  Here’s a reminder…

The point is, there is often an overall gestalt to sounds, music and atmospheres, being greater than the sum of their parts, and there is mystery and intrigue in imagining how those sounds were created if those parts were to be disassembled.  The layering creates unexpected harmonies and overtones, and even unrelated memories of events can be activated.

Braeyden Jae’s latest album Fog Mirror (Braden McKenna’s nom de plume) clears the mind yet it can steer its focus in rather curious ways.  Each piece has a perceptible aggregate tone (whether major or minor, deliberate or unintentional), and some tracks stay relatively stable, almost devoid of a perceptible melody, whereas others meander and ruggedly thrash beneath the haze.  McKenna carefully disguises the sources of his sound generation, which I’m guessing are varying degrees of fuzz applied to an electric bass, piano (literal in Obscured and Waiting, but veiled elsewhere), along with various effects, treatments, noise and perhaps some field recordings.  The illusion of water and wind, which appear to be created synthetically, are prominent throughout, offering the effect of cleansing, even if it suddenly appears as a deluge.  Another quality of the recordings is the “Did I just hear that…?” aspect of the layering, like walking in the dark and seeing something move nearby or the flash of something moving beneath the surface of a body of water.

Vanishing Procession is like sitting behind a gentle waterfall with occasional peeks through the cascading water to a scene beyond, or sitting on an open porch with rain falling as time passes slowly by.  There are some similarities the works of Nicholas Szczepanik, but McKenna’s variations in the layering of the sounds are more subtle.  In contrast, More Washed Feeler is practically a deluge with a undercurrent of recirculating ascending and descending notes, a sonic mantra of sorts.  Seven minutes into the piece, the torrent is forced open slightly to reveal a swirling undertow.

A steelier resonance is present in Obscured and Waiting, with a slow pulsing piano.  This is the most identifiable, melodic and peaceful track on the album with a wooly-fuzz bass occasionally piercing the quietude off in the distance, sounding like shortwave radio sawtooth-wave interference.  The piano evolves into sounding like far-off carillon bells. This is a rough-edged version of portions of Budd and Eno’s The Plateaux of Mirror.

There’s a veiled rhythmic gait working against a counterpoint of concealed peeling bells in Two Mirrors Looking.  It’s more industrial-sounding with an undercurrent of an old shipyard recorded just below the surface of the water with a sudden harmonic shift at about 6-1/2 minutes as perhaps a ship’s screw passes by on its journey out to sea.  The last and longest track on the album, Fogged Placer, I actually perceived as being the shortest—a rather odd time-shifting experience.  This track allowed a memory of mine to return, back to the days when I commuted periodically to the Adirondack region of New York as a passenger in a twin-engine Piper aircraft—sitting in the back listening to the two engines shift the timing of their revolutions slightly, generating hypnotic vibrations and harmonics that were transmitted into the plane’s fuselage.   At certain moments, it also sounds like watching a blanketed symphony performance, with my ears isolating the cellos and double-basses.

Finding a semblance of peace in absolute silence these days can be rather difficult (especially when unwanted tinnitus randomly appears), and an album like this can help achieve a frame of mind that allows an imaginary escape to evocative places and memories.

An aside, I wonder if Braden McKenna has ever heard the opening side of the 3 LP set of Consequences, by Kevin Godley and Lol Creme, produced in 1977?  I could hear some similar background atmospheres, although the resulting piece is quite different.