Digital files available at: https://salvatorepassaro.bandcamp.com/releases and at iTunes

There’s a somewhat enigmatic quality to this album: the instrumentation, what might have inspired the work and to a certain extent, Mr. Passaro himself.  What I do know is Italy-based Passaro’s last work, a collaboration with Carlo Cossu entitled Earth, was released approximately 15 years ago, and there are some excerpts from that collaboration scattered around the internet (which I chose not to sample).  Since I’m a bit of an equipment geek, I normally find background helpful, although I’m told by some musicians, “…never reveal your secrets…”  Despite the album’s title, Overwhelming is a relatively calm offering that exists within a fairly narrow emotional range, with minimal sonic distractions and melodic directions.  Whether spontaneous or scripted there are moments where Overwhelming leans toward the ambient music genre with an occasional sense of place, and others where it’s nearly sleep-inducing devoid of an identifiable physical realm, yet the music generally hovers somewhere in between. 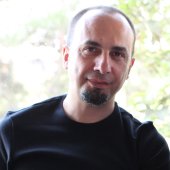 The instrumentation (real and/or virtual?) appears to be primarily electric guitar, piano and some electronic keyboards with various effects and treatments.  The strongest sonic nudge is the opening track, Stone with purer sounds that are woven and sustained.  Only near the end more forceful tones and grit enter the soundscape.  Touch is more spacious with grainier qualities.  Then the album settles into a more pleasant, swaying and peaceful interlude with A Light, Dream, Memory and Next.  In this section places and memories are evoked with veiled sounds of a shoreline, wind, voices and the outdoors.  Next is the most restful.

Many of the pieces seem to be improvised with minimal underlying structure (I could be entirely wrong).  Circular has drifting voices co-mingling with piano and keyboards.  Blue continues with even more random bell-like notes (perhaps on a heavily processed piano) until there appears to be momentary references to Vangelis’ Memories of Green.  Ironically, the title track Overwhelming is one of the more sedate pieces on the album with gently rolling voices mixed with guitar and keyboards.  Whereas, relatively true to its title, Early Morning has sounds emerging and blending much like the rising Sun as colors of a new day are gradually revealed as darkness wanes.  Settembre is plucky, gritty and random.  Phased, flanged and wandering is It Is, and Trip gently winds-up and then coasts with scenery wisping by in slow-motion.  Sinestesia closes the album and is the haziest, layered and trance-inducing track, and it doesn’t stray far from its central sonic focus.

The CD version of the album is available directly from the artist at the website noted above with digital versions available at Bandcamp and iTunes.

Buried and Resurfaced is the final release, of 60 albums and EPs, from the Twice Removed record label.  Label curator Gavin Catling, in far away (from me) Perth (western) Australia, has done a fine job of bringing artists and musicians to our attention since 2011, and I’m sorry to see him put the label to bed, but understand his desire and need to bring the project to an end.

This album arrived here at an interesting moment; I had recently done some reading on the gradual and tragic decline of the Aral Sea between Kazakhstan and Uzbekistan.  Some of what I have read and imagined about the decline of that landscape seems to have parallels in René Gonzalez Schelbeck’s musical creation, even the title.  I have also just seen Guy Maddin’s adventurous, liquid-time-bending and bizarre film, The Forbidden Room, and in many ways Buried and Resurfaced could have been a soundtrack for that film.  The film is an homage to old lost and often quirky movies, which Maddin reimagined, and they are collected as an amorphous omnibus that is almost beyond description and, at times, comprehension.

Another parallel to Buried is it can be beheld as either individual pieces or part of a larger whole with a real or imagined narrative.  The tape-decayed and modulated passages in Buried blend remarkably well with Maddin’s visuals (firmly planted in my memory—it’s an intense film).  The possible album storylines I have posited are two possible accounts, but there are many others, despite what might be the actual intent (if any) of RG Schelbeck.

There is an ancient and mysterious quality to the music from the start.  Tape decay and flutter produces wrinkles in the perceived time continuum.  The electric guitar is also well disguised with bowing, modulation, and effects, often yielding qualities akin to a long-neglected Mellotron or Chamberlin.

Awakening is the languid preparation for the journey and pending storm.  Black Sea has a dark foundation and buffets with macabre winds lashing a hull at sea and occasional sonic breaching of the portholes (this piece is an especially perfect match for Maddin’s film).  Quiet Rust is a peaceful yet unsettling aftermath to the storm with its sustained and reverberant atmosphere (this track is well mated with Schelbeck’s companion video: scenes of San Francisco after the devastating 1906 earthquake).  It also reminds me a bit of Kane Ikin’s and David Wenngren’s collaboration Chalk from their 2012 album Strangers.

Being cast adrift in an increasingly dense fog is the texture of Passage with expanding and layered dark droning strings.  Echoes pulses above and near before vibrating from the depths (a subwoofer helps to enhance this).  Sounds move near, then are distant and fade into the ether.  The most active and sweeping of the tracks is Behind These Walls, as if the storm of Black Sea returns, this time on land with squalls lashing relentlessly.  I think I hear the warm and familiar hum of a tube amplifier in Thaw, with the percussive plucking of strings, as if water is dripping from ice in a warming sunshine.  Buried and Resurfaced closes gently with the reflective and contemplative Distances with far off sounds of (perhaps field recordings of) nature absorbed into the haze.

My one criticism of the album (also a compliment), is the abbreviated timing of some of the pieces makes them seem rather elusive.  Just when settling into the immersive aura of the music, some tracks fade away too soon, and I was left hoping that each would last longer for a more deeply enhanced experience.  Perhaps extended versions might appear at some point in the future?