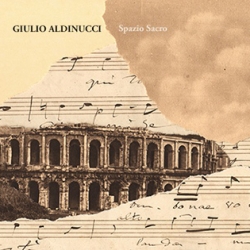 Memories get tucked away in our minds and emerge at unexpected moments; their return prompted by any of the senses, especially sound.  Spazio Sacro (translation: Sacred Space) is a personal journey of Giulio Aldinucci’s time and recollections in and near his native village in the Tuscany region of Italy, where observances and sacred rites have occurred for centuries.  It also appears there could be differing perspectives in this album, perhaps not just those of Aldinucci.

Giulio Aldinucci initially released three albums under the moniker of Obsil, and two albums since 2012 using his own name (Tarsia in 2012 on Nomadic Kids Republic label and the recent Aer on the Dronarivm label), as well as other side projects like his Postcards from Italy collaboration with Attilio Novellino (an album, live event and special gallery installation in London).  His work travels fluidly between silence, edge of consciousness and crystalline lucidity.

I can speculate on whether a composition is a first or third person experience (as in The Hermit, which seems to start as an outdoor morning awakening, as a village returns to life), but it is clear when the memory is more personal and intimate, as in Ricordo.  Initially, an observer in motion, traveling and then arriving.  Eventually, there is slow movement through spaces, made apparent by different sounds passing by, entering and departing.  Some sound images are clear and seem more recent, whereas those more distant in time are fleeting, layered and translucent (perhaps the memories less tangible and accessible with time).  Yet, there is a sense of comfort in tradition and the sacred, heightened with choral voices.

Quiet moments are sometimes interrupted, from the initial reverie.  Distractions enter and overpower the quietude of the moment in Sator.  The chill of a season is evoked in Come Un Immenso Specchio D’inverno, while at the seaside with people nearby, where the winds and cold water can be heard.  Liquid Room is the most ethereal, drifting in and out of choral passages and reverberant organ.  There is also a peregrinating motion in this piece, as if wandering to seek a sonic focus which emerges at a little over three minutes in, before gently releasing its energy to silence. 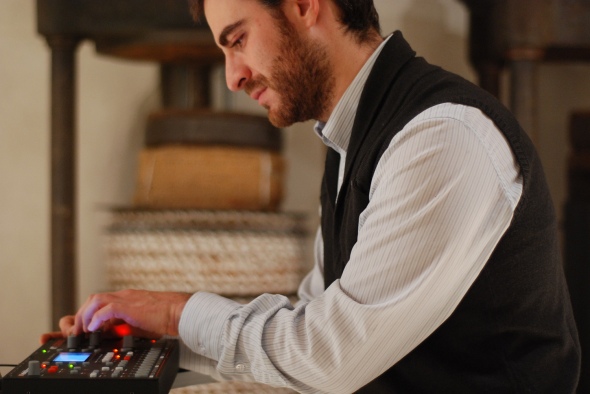 Mountain, while being from an experience of Aldinucci’s, instantly brought back a personal memory of a train trip that I took from Milan to Lausanne in the late 1980s, a rather bizarre experience passing from the northern Italian landscape by rail, then disappearing into a mountain, only to emerge on the other side in a completely altered countryside with buildings looking so different.  It is in Mountain where the field recordings are absolutely vivid (some of the best I’ve ever heard in how they blend with the music).  I actually found myself turning my head in my listening space to look for the source of some of the sounds, and to check if the birds that I was hearing was due to a window that I had left open—effectively deceptive in the transparency, recording and mastering of the album.  The most curious and somewhat perplexing is the last track, Camino—I’m not sure if the title is a location (as in near Venice?).  The title also translates to different things, depending on the language—and so, we have a mystery…sometimes music needs a conundrum.  There is a strange rhythmically liquid sound mixed with periodic buzzing and a distant ship’s whistle, as well as cascading voices.

A common and most pleasant thread in Spazio Sacro is the recurrent appearance of gentle choruses and distant peaceful tones resembling a church organ, something that I have always found comforting, with or without a liturgical connection.  Giulio Aldinucci’s work evokes a strong and clear sense of the places and times that occupy the memory chambers in his life, and the traditions at the heart of those recollections are timeless. 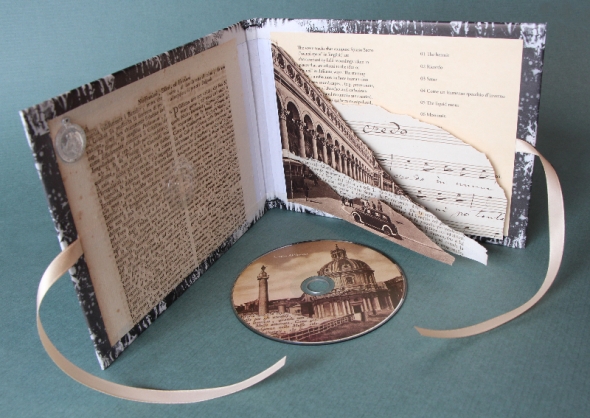 Photo of the Deluxe Edition 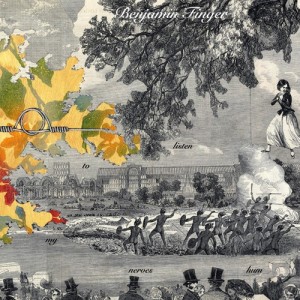 [Frank] Benjamin Finger is a freelance photographer and director from Oslo, Norway who has completed several short films and music videos in addition to his work in television and photo exhibitions.  He has two previous albums Woods of broccoli (2009) and For you, sleepsleeper (2011).  More on his previous music work is here:

Listen To My Nerves Hum is a curious album—it took a few listens to settle-in with me.  It’s neither soundtrack nor is it a cohesive album of music with a connective tissue other than the pieces are built upon simple (and often repetitive) phrases on piano (co-mingled with voices or field recordings).  I tried to find a thread that would tie things together.  The album (for me) in the end is more like incidental music to shorts scenes in a film either built upon visions or daydreams.  Some tracks conceal mysterious hosts and surroundings (like Birthslides and Consonace of Fear), others sound celebratory (Ano Nuevo Acid Crackers’ fireworks and Ode To Blissa’s marching band with prominent snare drum cadence).  Some tracks are somber, almost funereal as on Fearless VK.  In particular, I found the first track Birthslides to be appropriate for the approaching Halloween season—rather furtive and mysterious.

Some parts of Listen are quite pleasant and tranquil (Road To Salema, By Sinus and Outside of You), and others I found quite dissonant or distracting (such as Das Paris Des Second Empire Benjamin).  I also detected that when adult voices were part of a given mix, the metronomic piano was played on the lower pitch end of the keyboard whereas with the sounds of children upper register notes were used. 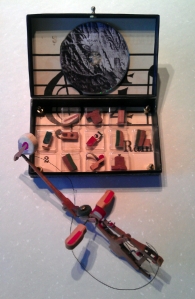 It’s a pity that I didn’t get to see one of the original 70 deluxe CD version before it sold out (boxes with collages and a small hanging sculpture made from antique piano parts known as The Hammerheaded Wippin Bird, Time Released Sound being well-known for their handmade releases): http://timereleasedsound.com/shop/releases/benjamin-finger-listen-to-my-nerves-hum-deluxe-version/

The vinyl LP (limited to 300 copies) is available here: http://timereleasedsound.com/shop/releases/benjamin-finger-listen-to-my-nerves-hum-vinyl-version/

Perhaps the label might consider releasing Tracks 12 through 16 as a digital EP to accompany the vinyl LP.