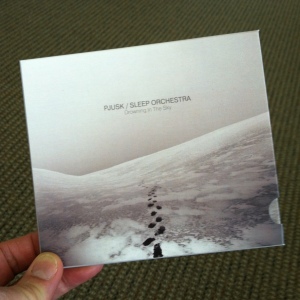 [Frank] Benjamin Finger is a freelance photographer and director from Oslo, Norway who has completed several short films and music videos in addition to his work in television and photo exhibitions.  He has two previous albums Woods of broccoli (2009) and For you, sleepsleeper (2011).  More on his previous music work is here:

Listen To My Nerves Hum is a curious album—it took a few listens to settle-in with me.  It’s neither soundtrack nor is it a cohesive album of music with a connective tissue other than the pieces are built upon simple (and often repetitive) phrases on piano (co-mingled with voices or field recordings).  I tried to find a thread that would tie things together.  The album (for me) in the end is more like incidental music to shorts scenes in a film either built upon visions or daydreams.  Some tracks conceal mysterious hosts and surroundings (like Birthslides and Consonace of Fear), others sound celebratory (Ano Nuevo Acid Crackers’ fireworks and Ode To Blissa’s marching band with prominent snare drum cadence).  Some tracks are somber, almost funereal as on Fearless VK.  In particular, I found the first track Birthslides to be appropriate for the approaching Halloween season—rather furtive and mysterious.

Some parts of Listen are quite pleasant and tranquil (Road To Salema, By Sinus and Outside of You), and others I found quite dissonant or distracting (such as Das Paris Des Second Empire Benjamin).  I also detected that when adult voices were part of a given mix, the metronomic piano was played on the lower pitch end of the keyboard whereas with the sounds of children upper register notes were used.

It’s a pity that I didn’t get to see one of the original 70 deluxe CD version before it sold out (boxes with collages and a small hanging sculpture made from antique piano parts known as The Hammerheaded Wippin Bird, Time Released Sound being well-known for their handmade releases): http://timereleasedsound.com/shop/releases/benjamin-finger-listen-to-my-nerves-hum-deluxe-version/

The vinyl LP (limited to 300 copies) is available here: http://timereleasedsound.com/shop/releases/benjamin-finger-listen-to-my-nerves-hum-vinyl-version/

Perhaps the label might consider releasing Tracks 12 through 16 as a digital EP to accompany the vinyl LP.