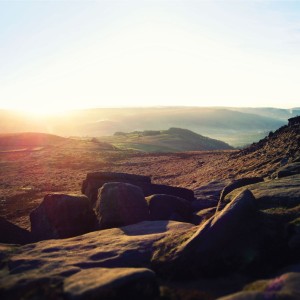 More on this release: http://hibernate-recs.co.uk/releases/autistici-beneath-peaks/

Beneath Peaks (Autistici’s debut release on Hibernate Recordings) is an interpretive sound narrative of a walking and camping tour through the Peak District in the central UK; a luminous and expansive journey with a strong sense of place.  The region is geologically diverse with moorland plateaus, expanses of millstone grit escarpments, limestone and demarking zones at the edges of the long-ago eroded strata.  I have been fortunate to take long walks in similar places: Devon (The Burrows in Saunton) and on Exmoor in the southwestern UK, and Beneath Peaks is certainly an enticement to travel to this varied pastoral upland region.

Even before the music, I was struck by the hues, varying landscape and seemingly endless sky in the cover photo (quite similar to Exmoor in some respects).  The photo is also illustrative of Autistici’s work, which ranges from outwardly expansive to inwardly minute explorations; the literal and abstract in a landscape that is both known yet still mysterious.

Instrumentation throughout the album is both recognizable and veiled, and includes piano, guitar, synthesizer and electronics, in addition to sculpted fragments of extensive field recordings captured during the trip (processed with the help of Christopher Hipgrave’s software module AMBIENT).  Additional guitar on Edge Over Millstone View was provided by Erik Schoster.

Beneath Peaks is book-ended by two sleep-states: an awakening (the beginning of the journey at a campsite named Fieldhead) and a closing to slumber and inward contemplation (at the ancient Carl Wark).  Throughout there is a deep sense of observation and contemplation, both in the literal field recordings and abstract sonic interpretations of the journey.

Asleep Beneath Nests (Fieldhead) is a deftly woven tapestry of field, avian and human sounds, rising with the sun (while human slumbers).  Edall is the sound of breathing and pulsing; movement through this timeless area.  Edall is a 16th century variant spelling of the village of Edale and was once known as the “Valley of the River Noe”; the start of the Pennine Way, a trail in this district.  Mam Tor Soarers’ Workshop; starts in what appears to be in a woodworker’s shop.  This is a region known for hang and para-gliding.  As this track progresses, it transitions from being grounded to having a sense of weightlessness.  The latter section (and I am speculating) appears to be a bit of an homage to Raymond Scott’s rhythmic and melodic electronic Bass-Line Generator (of 1967).  Styx is a brief and quiet transition into Edge Over Millstone View.  The sound is sharp and panoramic in contrast to other areas of rolling pasturelands elsewhere in this region (a reference to the geology, I speculate).

The rocky echoed sounds of Padley Gorge give the sense of passing through the deep narrow wooded valley near the village of Grindleford.  Burbage Brook is at the base of the gorge.  Noe (Upper Booth) is a small tributary to the River Derwent and forms a sonic respite before a pulsating encounter with Mulgrave’s Dining-Room.  Aidale (I believe, another early variant spelling of the village Edale) is at first, a delightful contrast to Mulgrave’s; a meandering solo piano, which then drifts into an altered dream-state and transitions to the apparent sounds of traffic passing or is it time bending?  Peveril’s Open Door brings us to the environs of Castleton and the nearby Peveril Castle, which overlooks the village with sounds of birds, nearby waterway and the piano returns.  The end of the journey is Sleep State For Carl Wark, the rocky promontory in Hatersage Moor (believed to be the site of an Iron Age hill fort).  It is here that memories of the distant past flow into and blend with the present, and sleep returns with music box and strings; the end of a captivating journey.

Autistici is Sheffield-based (UK) sound artist David Newman.  He is the curator of the Audiobulb (where I discovered the marvelous work of Monty Adkins) and Audiomoves record labels.  To date, Autistici has released a number of acclaimed albums on the 12k, Home Normal and Keshhhhhh labels, amongst others.

Updated sound files will be posted when available.

I am likely less-than-qualified to discuss this work since it is steeped in layers of academia and has densely studied connections with artistic subjects.  Yet, with all that Four Shibusa is a beautiful and very accessible collection of music on its own.  It has a stark clarity that I am coming to understand and appreciate more in the recent works of Monty Adkins.  I am most familiar with two of Adkins’s prior works, Five Panels from 2009 and Fragile.Flicker.Fragment from 2011.

This is an example of Monty Adkins’s work from Fragile.Flicker.Fragment

There is a companion video to “Remnant” here and I think it’s gorgeous:

Monty Adkins studied music at Pembroke College in Cambridge, UK where he specialized in French Medieval and Italian Renaissance music.  After an introduction to electronic music by ECM artist Ambrose Field, Adkins formally studied acousmatic music (a form of electroacoustic music).  More information on his studies and background can be found at his website noted above.  In addition to his own solo works, Adkins has been commissioned to create musical works for art installations, dance and other performances as well as curate collections with other composers of electronic, ambient and musique concrète (influenced by the pioneering work of Pierre Schaeffer).  He is on the faculty at the University of Huddersfield Music Department in the UK.

Shibusa is the concept of seeing the inherent simplicity and beauty in everyday objects.  This has been the basis for an artistic collaboration between visual artist Pip Dickens and Monty Adkins (both having an interest in Japanese culture and thought) that recently culminated with the release of this album along with a book and exhibition entitled Shibusa – Extracting Beauty, edited by both artists.  I have not yet had a chance to see the visual works (though some illustrate the CD cover) or book, in person.  I have read that the visual work is an exploration of color, pattern, rhythm and vibration in Japanese Katagami stencils and fabrics and the interplay of light, shadow and color—relationships which can range from spirited to introspective and reflective.  The CD, Four Shibusa is a collection of thoughtful and precise music compositions.  At times, their simplicity belies their great depth.

More information on the artistic collaboration is at this link:

Sendai Threnody, I posit, is a lament resulting from the massive and tragic 2011 earthquake and tsunami in Japan.  This piece is brilliantly played by clarinettists Heather Roche and Jonathan Sage.  The subtlety of the blending of consonant to dissonant tones adds to the power and serenity of this tribute.  Minimal electronics supplement this track.

Entangled Symmetries returns to sound explorations similar to Fragile.Flicker.Fragment, yet with a greater sense of restraint.  There is a deep inner reflection in this piece.  The more complex portions seem to be taking cues from the visual works of collaborator Pip Dickens where sonic patterns combine and vibrate.

Kyoto Roughcut has a distinctly mysterious quality.  It opens with very subtle and not readily discernable combinations of electronics and clarinets.  There is a building tension and the sounds expand with chattering and visceral undercurrents.  As the piece progresses, the clarinets are revealed with shrill edges, full tones and liquid electronics are woven and pulsed into the fabric of sound until it overtakes and floods the entire soundstage and gently wanes.  The clarinets return briefly and then all gradually fades.

Permutations opens with solo clarinet and a growing misty undertow of electronics with sounds reminiscent of meshed tonal percussion, strings and choral voices.  It is a somber theme similar to Sendai Threnody—almost like a beacon calling out in a steady rain.  Eventually, the clarinet melody shifts and the electronics gradually transform to purer tones like the clarinets and then the combined atmosphere of sound subsides, leaving a lone clarinet.

There is a meditative purity throughout Four Shibusa, but it is in no way a sterile.  The timbre of the clarinets adds a warmth to the overall work.  In each piece, there is a masterful sophistication and balance, and despite the use of electronics, the sound is never synthetic.  Sometimes the power is in the silence and the spaces, not always in the sound.  This I am coming to understand more with each new work by Monty Adkins.  As a record label, Audiobulb has again held fast to their tenet of being “…an exploratory music label designed to support the work of innovative artists.” 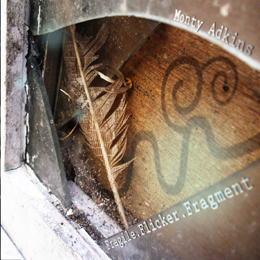 In my review below of M. Ostermeier’s latest album, I didn’t note that Marc referred me to the work of Monty Adkins and specifically his recent CD “Fragile.Flicker.Fragment.”  This album is a real gem, beautiful electric and acoustic pieces and wonderfully produced and it has been nominated for a Qwartz8 award in the album category in France: http://qwartz.fr/2012/01/24/qwartz-8-categorie-album-cat/ It’s available at  Audiobulb Records: http://www.audiobulb.com/

The track “Remnant” has an accompanying video, which is here:

Also, I recently became aware of the work of Marcus Fischer (why do I miss all these great artists?).  He has a just released CD entitled “Collected Dust”.  Please read more about Marcus’s work at his website: http://dust.unrecnow.com/ as well as at Tench Records (sound files here): http://www.tenchrec.com/TCH05.html The CD just arrived yesterday and it’s playing now.  A splendid work (also electric and acoustic in a similar vein to Monty Adkins’s work).

My Online Reviews Currently Appear At…