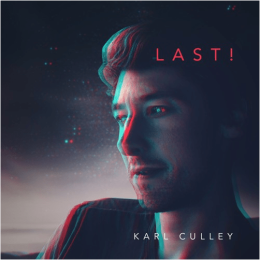 Some readers may remember my review of Karl Culley’s 2015 album, Stripling.  His new album Last (to be released on September 1, 2018) was recorded over the last three years in Culley’s home of Krakow, Poland.  The good news is we have new music from Culley, and he is also now a father of a young daughter.  The sad news is the turmoil in his life, a divorce, and due to various responsibilities he has decided this will be his “last” album of music.

The engineers for this album are Jaroslaw Zawadzki in Poland and Daniel Webster in England (the two tracks: Nastassya and Listen, with Webster playing all instruments, except for Culley on acoustic guitar).  At first, I listened to this album at home, in my little studio, then I took it on a long road trip to and from the Adirondacks (in upper New York State), to get to know it better.  It’s an excellent road trip album, by the way.

The subjects of this collection are both within the mind (things that can be imagined) and actual experiences (both joyous and painful).  This album is pretty dense, and with 21 tracks, I found that I needed about two sittings to get through it, which is NOT at all a negative comment.  Just the opposite, since the album is of a quality that demands a listener’s rapt attention.  In my opinion, this is not a collection of background music.  Coincidentally, at the mid-point of the album, is the metronomic instrumental 1, 2, 3, which serves as a bit of an intermission, before part two.

Culley deftly conveys the emotion of a given moment or the subject with only his acoustic guitar (ignoring the lyrics, for the moment), since the rhythms, strumming and picking reveal the intent of the song, like gently descending notes (like Embers falling in a fire) or a galloping heart beat (Being Alive) or the tender waltz (rocking cradle) beat and comfort and contentment in Delivered (My Maja).  Maja also plays tricks with time, at first it’s the marvelous intimacy of having a newborn child on one’s chest, and then four lines later to “…unfurl to your consorts…”  In a sense, preparing to release her to the world in her later years (children DO grow up quickly, as I can attest).

Without knowing (or wanting to know) the details of Culley’s private struggles over the last three years, it’s clear from this album that there are many complexities to love, relationships, and resentment.  Have a listen to the darkness in Nastassya (which I am told is based on Dostoyevski’s The Idiot) or the anger and harsh reality in How It Works.

One of my clear favorites on this album is In A Sky Of Infinite Suns, with its snappy taut rhythm–I found that I kept hitting replay on my car CD player to keep the energy going.  Another of the near-breathless pieces is Being Alive, with its galloping rhythm of angst “…just being alive hurt so much…looking into the mouth of a liar…like walking through the fire hurt so much…” (also sounding like a fast-beating heart with the lyric “…swells in the blood…”).  By contrast there are contemplative meditations like Listen, and Reality Is Like The Sun that are both reflective and perhaps self-analytical (just like the more energetic and playful Mistakes).  I wonder if KC finds that his own music can function as a form a therapy?  I certainly find music to be quite therapeutic, whether energetic or comforting.

There are moments of keen observations of the bizarre, but absolutely true aspects of life, like in Wedding And Funeral Shoes, as well as moments of levity, Devil In A Damned Fine Suite.  Overall, Last is a fine balance of musicianship and storytelling in a similar vein to the earlier acoustic works of Gordon Lightfoot, and if one listens carefully, one might pick-up the descending tones reminiscent of the opening to Nick Drake’s Chime Of The City Clock in The Siege Of Antioch (a pretty heavy observation on the First Crusade).  The last song on the album, Looking Back Blues, is a reflection of sadness for a time past, but (perhaps) an appreciation that the passage of time can yield after the breakup of a relationship…there will always be a connection, especially when a child is involved.

I am sorry that Karl Culley is leaving the music scene, alas the realities and responsibilities of life somehow do take over, but I hope KC finds other rewarding endeavors for his talent and creative spark, and hope he enjoys watching his daughter grow up.

More on this release:

I have a broad rotation of albums, all sorts of genres (I listen to more than ambient and electro-acoustic works, despite what some might think from my reviews).  Since its release in 2009, Almost Charlie’s album The Plural Of Yes (TPOY) hasn’t been too far away from my CD player.  It’s a great album of songs written in the tradition of Elton John and Bernie Taupin or Burt Bacharach and Hal David, musician and lyricist working separately.  In the case of Berlin’s Dirk Homuth (singer and multi-instrumentalist) and New York City’s Charlie Mason (lyricist), they still haven’t met in-person and aren’t separated by “two rooms”, but two continents and an ocean.  It’s evident, however, from their work together that they communicate well, no matter what the distance.

Tomorrow’s Yesterday is the latest release, and I’m really happy that Almost Charlie has returned after three years with more beautifully crafted and skillfully recorded songs.  There are familiar faces in the band: Sven Mühlbradt on bass and Pelle Hinrichsen on drums and percussion with the addition of Bert Wenndorff on piano as well as other supporting musicians.

For those unfamiliar with Almost Charlie, I find similarities to the songwriting and sound of bands like The Beautiful South, The Autumn Defense and some of the less raucous songs of the Fountains of Wayne.  I’d even compare some songs to works by 10cc (either written by Eric Stewart/Graham Gouldman or Kevin Godley/Lol Creme).  Similarities to the Beatles are also unmistakable (especially the voice of John Lennon with a bit of George Harrison on the track Still Crazy ‘Bout You After All These Years).  There are marvelous wordplays, edges of wit and subtle metaphors in the lyrics resulting in this latest collection of musical gems.

The feeling of Tomorrow’s Yesterday is a bit more pensive and acoustic than TPOY, but there are upbeat, playful and spirited tracks too.  Instrumentally, the foundation of most of the songs is guitar, bass, drums and piano, but many of the tracks are delightfully punctuated with brass, woodwinds, sitar and dobro guitar.  Some of the finest moments are simply acoustic guitar and Homuth’s vocal harmonies, as on Sandsong, which is a bit melancholy and reflective.  In this album there are songs of relationships, a sense of realism, but not resignation; acceptance and contentment, but also a feeling of hope as in Cummings.  I also appreciate that the recording is crisp and sounds like a live performance in the studio with minimal processing.  There was only one point (at the end of the last track) where the recording was sounding saturated on my equipment, but I stress this is a minimal issue.

Hope Less (a song of setting expectations) begins with acoustic guitar and harmonies and then advances into a march of sorts.  This and Open Book are great examples of the smart wordplay in the lyrics, double-meanings, literary references and a deft efficiency of expression.  Man Without A Home and Youth Is Wasted On The Young are ironically upbeat ruminations with shades of The Byrds (electric guitars), syncopated rhythms and are gently arranged with brass and strings respectively.  A Nice Place To Die has a lively rhythm and bluegrass roots-music vibe with dobro and violin solos.  Tomorrow’s Yesterday is a stark and melancholy observation on the passage of time, and perhaps more than any other track Homuth is channeling John Lennon’s voice (literally and figuratively).

Undertow (a favorite of mine) has power in its symbolism and realism; the words and music combined are indeed greater than the sum of their parts.  The passage “The more I try to fight it; Its grip on me is tightened…Overwhelmed by the undertow” is about as close to perfect as it gets.  The closing track When Venus Surrenders builds from a quiet beginning, and is the longest and most ambitious song on the album, similar to the spirit of The Monster and Frankenstein from TPOY with a nod, I think, to The Beatles’ Let It Be.

As The Plural of Yes was in 2009, Tomorrow’s Yesterday is one of my favorite song-albums of 2012.  Perhaps next time lyrics could be included in the package, since they are such an integral part of the songs.  The Homuth and Mason formula works, the chemistry is still there, and I hope they continue to write songs together and we hear much more from Almost Charlie in years to come.