Photos of Musicians on the Album:

It has been 16 years and many life changes since the last Genesis Revisited album by Steve Hackett (subtitled Watcher of the Skies) in 1996.  Although the span of time recounted musically is similar, 1971 through 1976; the breadth of the work on GRII is far more comprehensive.  It’s also worth noting that in 1987 Steve was a special guest on an orchestral reinterpretation album of Genesis work, We Know What We Like: The Music of Genesis (led by arranger David Palmer conducting The London Symphony Orchestra), although in that case it includes works after Steve had left the band (from albums And Then There Were Three and Duke).  On that album is perhaps the best example of how well the work of Genesis transfers to an orchestral format: Can-utility and the Coastliners.  As much as I love the instrumental section with waves of Mellotron on the original recording, the full orchestra adds great depth and power to that track.

I’ve read (and I’m paraphrasing) that Steve didn’t want to literally re-record these works (as some Genesis tribute bands so painstakingly perform), rather enhance them with the lens of time, since many were recorded somewhat hastily between concert tours in the 1970s.  Another added benefit is that some recording technologies have improved, and this is quite clear in the warmth and clarity of GRII.  Frankly, I rather liked many of the reinterpretations on the last GR album, and there was the added track Déjà vu originally penned by Peter Gabriel and SH, then set-aside, to be revived and beautifully completed with Paul Carrack’s vocals.

As much as I wanted the limited 4 LP vinyl set, I opted for the 2 CD version along with the extensively illustrated and annotated small format hardbound book—a quite worthy trade-off (designed by Harry Pearce of Pentagram Design).  It’s clear that this album was an enormous undertaking (with a special mention for the co-production, recording and mixing by collaborator and keyboardist, Roger King), with some 30 guest musicians and vocalists (including brother John Hackett, SH Band alum Nick Magnus, and the members of the most recent touring and recording SH Band: Roger King, Gary O’Toole, Nick Beggs, Amanda Lehmann and Rob Townsend).  I have provided a link above to a page on the SH Website showing a complete list (with photos) of all who participated on GRII.  A matrix of the album track performers in included in the credits.

Throughout the album there are a number of acoustic guitar introductions (like the opening to the potent The Chamber of 32 Doors), variations and electric guitar solo fills by Steve that are not on the original recordings; they reflect journeys and musical influences from his many years as an artist.  Horizons and Supper’s Ready are preserved in their pairing from the original Side B of Foxtrot.  The solo acoustic guitar of Horizons has long been a mainstay of Steve’s live shows since the early days of his solo career, and here it’s just as pure, unrushed and striking as a morning sunrise or evening sunset at one’s favorite place to be.  The vocals and instruments on Supper’s Ready are powerful, clear and Steve’s guitar is “up” in the mix (as it is on much of the album).  The treatment greatly invigorates the original, and made me want to take the time to listen to the entirety of the track repeatedly.  The Apocalypse in 9/8 and the closing section of As sure as eggs is eggs (aching men’s feet) just sends chills up the spine as from those concert days long ago.

The purity of Nik Kershaw’s vocals on The Lamia is different from Peter Gabriel’s more raspy treatment of the song, and to my ear it’s a stunning performance (brighter than the original).  Again, the instrumentals have a clarity superior to the original (although, I’ll never turn my back on the Charisma/ATCO recording of The Lamb Lies Down on Broadway—too many aural historic memories there).  SH’s closing solo echoes the original while adding a smooth lyricism.  I’d be interested in knowing how and why Kershaw was chosen for the track.  After a brief acoustic guitar link of Greensleeves, Francis Dunnery’s (It Bites et al) vocals on Dancing With the Moonlit Knight are probably the closest to channeling Peter Gabriel and the Selling England by the Pound performance as on any of the album’s tracks.  As has been the case during recent concerts, drummer Gary O’Toole performs the vocals on the Lamb’s two tracks Fly on a Windshield and Broadway Melody of 1974.  Both are broad and authoritative performances.  O’Toole’s voice is his own. 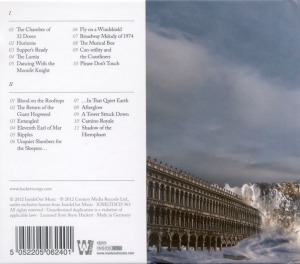 I have always wondered why Anthony Phillips isn’t credited as a songwriter on The Musical Box, since he and Mike Rutherford wrote and recorded the early demos in 1968, when the track was known as F Sharp, but anyway…  TMB opens with an almost Raymond Scott-like musical box fantasy, before entering into the realm of the long ago Nursery Cryme album.  Sung by Nad Sylvan (who also provides vocals on Chamber and Eleventh Earl), this interpretation has an intimate sound, chamber-music-like, with clustered and freer vocals, before breaking into the raucous guitar-centric bridge and to the familiar closing that was performed in concerts during the mid to late 1970s.

As noted above, I think one of the most powerful and diverse Genesis tracks from the early days, which is frequently overshadowed by Watcher of the Skies or Supper’s Ready, is Can-utility and the Coastliners.  Steven Wilson (solo and Porcupine Tree) provides the vocals.  This version has the “soft bits and loud bits” and combines the oceanic strings (violins/violas) and bass pedals with the rawness of Foxtrot.  Please Don’t Touch (from the 1978 album) closes CD 1 and was a track originally to have been linked with the instrumental Wot Gorilla on the 1976 album Wind and Wuthering.  One of the reasons SH left Genesis (well documented) was he felt at that time his contributions to the band were being overlooked, so when he appeared officially as a solo artist, this track was the perfect, aptly named, composition to strike out on his own.  It has had many incarnations, including sections of a 1986 track Hackett to Bits from the eponymous GTR album with Steve Howe et al.  I remember concerts from the late 1970s and early 80s that would end with this track at ear-splitting volumes.  This version is dark and authoritative.

CD 2 contains many tracks co-written with single Genesis members rather than the full band (exception is Hogweed and In That Quiet Earth), and one of my personal favorites is the timeless (and still topical) track penned with Phil Collins, Blood on the Rooftops.  For years, SH played small sections of this track as a teaser during his acoustic “breaks” at concerts, and then in the early 2000s, the full track appeared in concerts and live recordings.  This piece has a great deal of meaning to me—like entering a time machine to another place.  Steve opens with a small fantasy on his nylon string guitar before the track begins, and I consider it a great gift to his fans that it has been recorded again (vocals by Gary O’Toole and woodwinds by Rob Townsend).

The Return of the Giant Hogweed is a different type of track in the Genesis oeuvre that starts with an attack (or rather, an infestation!).  It also displays SH’s early fret-tapping technique.  Although this video is not the recording from the album, it has a similar spirit and same vocalist, Neal Morse (taken from the 2010 High Voltage Festival by Transatlantic with SH as the guest guitarist).

Entangled was written by Hackett and Tony Banks—the dreams and nightmares of an altered mind.  The vocals (fuller than on A Trick of the Tail) are by Jakko Jakszyk with backing vocals by Amanda Lehmann (guitarist and vocalist in the SH Band, and Jo Hackett’s sister).  Eleventh Earl of Mar (Banks, Hackett, Rutherford) has a much deeper and clearer sound that I always found lacking in the original recording (and all of the reissues…for some reason the David Hentschel engineering that sounded so great in the Seconds Out live album, just sounded so flat and compressed).  Nad Sylvan also adds layers to the spirit of the original Phil Collins vocal harmonies and channels the voice of Noel McCalla at times.  Nick Beggs’ bass energetically drives the piece.  Amanda Lehmann skillfully adapts the Collins’ vocals on Ripples, adding lyrical depth to the chorus (also a tribute to the engineering, recording and mixing of co-producer Roger King).  The instrumental sections are faithful to the original.  Lehmann returns again on the closing track Shadow of the Hierophant, which was co-written by SH and Mike Rutherford on Hackett’s first solo album from 1975, Voyage of the Acolyte.

Grouped together are (Hackett and Rutherford’s) Unquiet Slumbers for the Sleepers…, followed by the group-written …In That Quiet Earth, and Tony Banks’s deeply melancholic Afterglow, the closing tracks of the last official album that Hackett recorded with Genesis (excluding the 1977, 12 inch EP Spot The Pigeon).  SH improvises more freely on his guitar in …Quiet Earth and the solos that close (including Rob Townsend’s soprano sax) are more rugged than the original.  The strong and familiar voice of John Wetton anchors the close of the trio from W&W.

It’s exciting to hear a reinvented A Tower Struck Down (from 1975’s VotA) with a true orchestral opening (Dick Driver on double bass, Rachel Ford on cello, Christine Townsend on violin and viola and John Hackett on flute).  The solid bones of the Tower from Acolyte are present, but in a completely different, even darker skin.  Steve Hackett notes that he had dreams of Genesis playing the chorus of Camino Royale (written by SH & Nick Magnus).  This track dates from the 1982 solo album Highly Strung, and was always a great concert piece, from when Nick collaborated with Steve in the late 1970s and 1980s—full of spirit and rhythmic precision, a great addition to this collection.  This track also includes jazz influences from the Hungarian band Djabe (Steve has collaborated with Djabe on some of their recent albums and concerts).  As does Voyage of the Acolyte, Genesis Revisited II closes with Shadow of the Hierophant.  This version is more up-tempo and potent, and Rob Townsend’s flute peregrinates throughout the shadows.  It closes as it has since it was first recorded with the hierophant traveling on the long journey of seeking and interpreting the sacred and the arcane.

The one thing some (purist) listeners might find missing in GRII is the grittiness of the original recordings, but the defects of these compositions from long ago have been deftly exorcized, and the sonic foundations treated with such care that Hackett not only preserves the legacy of his former band, but enhances it for future listeners.  These recordings are not meant to replace the originals; they are akin to variations by composers of the past.  In a way, Steve Hackett is the archivist of the musical spirit of Genesis from that time.  Sit back and enjoy this brilliantly crafted set of recordings with all the 21st century enhancements.  You will not be disappointed.

The Hackett Band will be on tour with many of these recordings in Europe, the UK and America in 2013.  I can’t wait! 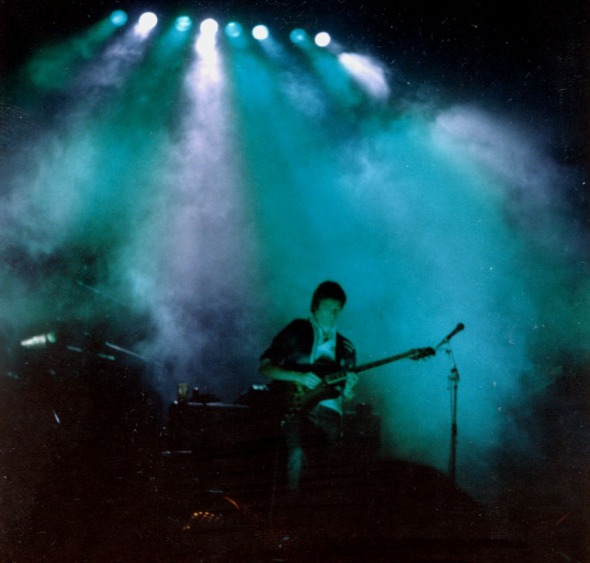