I find it hard to believe that my original LP copy of Apollo (Brian Eno, Daniel Lanois and Roger Eno) will be thirty years old in 2013, but there it is—one of the great albums of the ambient music genre.  When I think of Roger Eno’s music over the years, three words come to mind: thoughtful, quirky and sometimes playful.  Whether lyric or instrumental, RE’s works tell stories that can either be tightly sewn threads or loosely knitted yarns.  Often, the subjects are quiet ruminations, but they can also be spirited and cheerful.  His works can also be rather enigmatic, as noted in an autobiographical analysis from his website: [He is] “On an ongoing and heterogeneous musical journey which twists and turns and goes whichever way you think it won’t.”

Roger Eno entered the professional music scene with Apollo after music lessons and college to study music (as a multi-instrumentalist and singer), as well as running a music therapy course at a local hospital.  In addition to working with his brother Brian, Roger has collaborated with artists including Bill Nelson, Kate St. John, Lol Hammond, Peter Hammill and Michael Brook, and has provided soundtracks for films and advertisements.

RE’s most memorable albums for me (of his 25 or so) include: Voices (1985), The Familiar (w/ Kate St. John, 1993), Automatic and Excellent Spirits (both with Channel Light Vessel, 1994 and 1996), Lost In Translation (1995), Swimming (1996), The Music of Neglected English Composers (1997), and more recently Fragile (Music) (2005), Anatomy (2008) and Flood (2008, a reinterpretation of a soundtrack constructed for Salthouse Art Festival in North Norfolk).  I hope that Roger works again with Kate St. John and Bill Nelson; their work together on The Familiar is some of the most touching and enchantingly inspired work that I have in my music collection.

Ted Sheldrake is a departure from Roger Eno’s instrumental ambient work; originally a quiet neighbor and later a friend, it’s a tribute to a life, and even though it takes place in recent times, it could have just as easily taken place a hundred years ago—in many respects it did.  It’s a familiar story in literature as well.  In Victorian times, Richard Jefferies told the stories of common labourers, from the farm fields in his books like Green Ferne Farm, Round About A Great Estate (both from 1880), The Life Of The Fields (1884), and in newspaper articles during that time in the late 19th century.  In the first half of the 20th century Henry Williamson also wrote of life in a West Devon village known as Ham (The Village Book and The Labouring Life in 1930 and 1932, respectively) and described the country life in the narrow village streets, fields and hedgerows, “local colour”, and stories of the “everyman”.

The compiled, mostly song-oriented work traces Ted in East Anglia (Suffolk and Norfolk, UK), being from a family of hearty stock, farm labourers and fishermen, and he spent his years working on an estate and living in a village where the pace of life was slower and the work was hard, but satisfying.  In his younger days Ted learned to play a melodeon (hand organ), and as the years passed he became known for composing and performing songs in local pubs and village halls.  In his later years, following his retirement, TS suffered the loss of his beloved wife, and something changed in him and it comes through in his music.

The album is divided, the way I see it, into two sections (observations and then reflections) and includes a number of recordings (songs, spoken word with accompaniment, and instrumental) made on location with cast of characters and talent connected to his life.

You’re Just A Bloke is an introduction to Ted’s work through the voices of others; a group interpretation of this universal and common man.  This is the first indication that Ted’s work and life isn’t embellished with ornate descriptions, he’s the “real stuff”, with genuine words.  Village life includes folks gathering in thatched cob or flint-walled cottages, village halls or pubs, and the jolly and perceptive All In A Garden brings this experience to life.  Ted’s songs are also a bit like tiny memoirs, recounting special occasions and getting spiffed-up for The Old Queen’s Head.

As time passes, Ted’s meager existence and loss of friends weighs on him.  Some around him sense a change in his countenance.  There’s Something Wrong With Ted tells the worry of a friend, layered austerely with piano and a keyboard.  The Cold Night Is Over is the beginning of Ted’s reflections of melancholy and pastoral memories of the farm fields and long views to the sea.  Marrers (marrows or zucchinis) is perhaps the most beautiful track on the album—deeply reflective, and one of the main reasons Ted would still rise in the morning—for his garden; at first a lone piano, then an open and sincere expression of longing.  The melodic theme is expanded modestly (and somewhat cheerfully at first), this time overlaid with memories in My Old Bike.  Ted’s is a simple life in the village, never needing to leave East Anglia, and now missing his dear wife.

The original version of You’re Just A Bloke is rendered by Ted—directly, perhaps even more so than Hemingway.  The last section of songs (with piano) present Ted’s most personal feelings, the endearing yet untrained voice, and uncomplicated romanticism of Moon Waltz and Ever True.  Sally is an instrumental tribute to his wife, which is proud and forthright.  Bittersweet is apparently Ted’s last song, interpreted by an ensemble of his mates (documented by local schoolteacher Miss Kemp—Ted didn’t write music, he just played it).  The final tribute to his life is the piece Ted’s Funeral Music, which sounds like it’s played on an old harmonium or church organ.

So, slow the world down, set a spell, and get to know Ted Sheldrake and his humble existence.  He might turn out to be someone you know, and it’s a simply delightful chronicle. 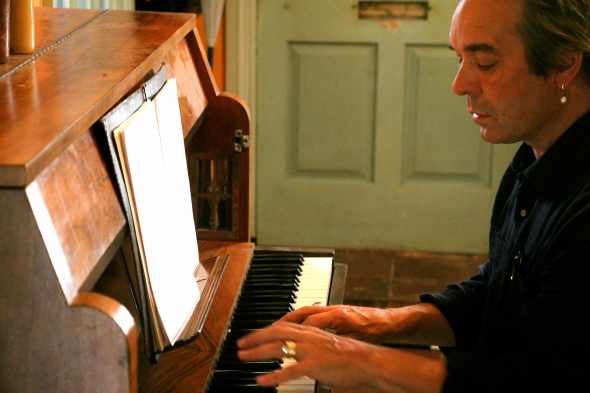 Ted Sheldrake will be released on January 7th, 2013.