The overlapping musical origins of Mike Abercrombie and Brad Deschamps have led to a sound that shifts between music genres: Mike’s roots being in electronic music and Brad’s in post-rock.  They share common interests in the works of Eno, Satie, Stars of the Lid and others, and their music is soothing yet with a clarity of awareness of the out there beyond what is often the prosaic miasma passing these days as ambient instrumental music.  It’s kind of like lightly sleeping with one eye open; taking in a view and related sounds while acknowledging what might lurk in the underneath or the above.  At first, the presence of a musical fabric sets a scene and then a transformation to what might be a song in search of a lyric or even a deep transitional groove—it fits well.

At times the change in sound can be more than just a nudge (an unforeseen entrance of percussion or a back beat as in the middle of I Have Never Seen The Light—a wake-up of sorts, as if to ask: “Are you paying attention?—Don’t drift off just yet!”).  It appears like a coalesced awareness from within a dream or as if sleeping in the warm sun when a cool breeze unexpectedly but pleasantly arises (a well known Canadian experience, I suspect).

There are threads between pieces on the album (and also to North Atlantic Drift’s first EP) like with the common sonic roots in Passing Time and Monuments (the undercurrent that binds) with the themes further developed with sustained and reverberant electric guitars.  I’m somewhat familiar with their previous album Canvas as well as their two EPs Amateur Astronomy and their first work Scholars of Time Travel, the root of the sixth track SOTT (part 2) on Monuments.  Part 2 is the awakened day to the original EP’s quiescent night with first an undertow of processed piano, and then the Sun rises as the undisguised piano is revealed. 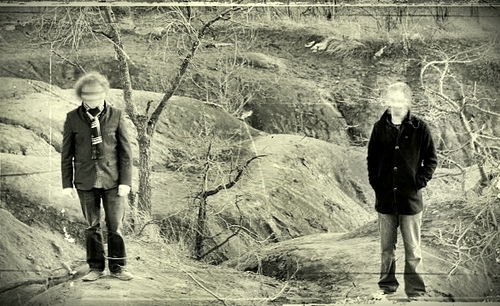 I find that North Atlantic Drift’s music has a stronger connection to recent work by Robin Guthrie (Cocteau Twins) as opposed to Eno, Satie or SotL, yet the overall sound is more rooted in tangible instrumentation; the alignment with Guthrie’s work being that moods are set with an opening wash of sound (while a spring is being gently wound) and then a release to a fuller rhythmic soundscape.  The most visually reflective track on the album is Sun Dial, the slow sweep of shadows passing as the light and activity waxes and wanes with the field-recorded ephemeral sounds of a day.  The extra track So Long As They Fear Us on the CDr (not the digital download) is a return to the quietude, like sitting on a porch (in the dark) on a comfortable rainy night with a safely distant thunderstorm.

And don’t forget to go back to their album Canvas—copies are still available.

The sounds that keep one up at night; they could be the house creaking, babies crying, traffic on the streets, the sounds of animals stirring outdoors, and my personal favorite the hoots of owls sending messages to each other in the dark.  In the case of Tom Honey (aka Good Weather For An Airstrike), what keeps him up at night is the ringing in his ears—tinnitus.  So, in 2009 Tom started his GWFAA music project as a means to help him relax and get to sleep (sounds like a candidate for a Slaapwel project too).  I know of at least six releases by GWFAA since 2009 (with labels Hibernate, Rural Colors, Bad Panda, Audio Gourmet, Sonic Reverie and his own Hawk Moon Records), but I’m sure that there are more, including his most recent and lovely tribute EP to his wife Lauren entitled This Is As Good A Place As Any.

His latest album Lights is to be released by the small independent Greek record label Sound In Silence (their contact information is noted above) in a hand made sleeve and is limited to 200 copies.  The album is arranged a bit like a meditation session, with instrumentation including guitar, banjo, strings, piano and percussion.  The sound is steadier and fuller than many recent ambient albums, and I’ll resist the temptation to compare GWFAA’s sound to the works of others.

A Quiet Day begins softly before introducing a calming and guiding pulse with a mantra first from a piano and then supplemented by gentle percussion.  Once in a more focused state Lights goes deeper, into the tranquil canon-like Thinking Of You.  There isn’t a feeling of yearning here for what cannot be or the unattainable; there is just an idyllic state of belonging.

As with any period of slumber, the brain still sends signals to be processed, and periodically there are voices, broadcasts and sounds that appear to be sorted-out.  Dreams send flashes that are discernible and other times are fleeting and out of reach.  Storm Fronts Collide returns to the time of the Paris Peace Accords and the VietNam War in 1973—voices from the past (forgotten by some and unknown to others, except those who lived through those times); the codified yet unratified tragic melancholy that sometimes enters the drifting mind.  The King XXVI and One Of These Days are also brief episodes in the sequence of reverie with the sounds of the outdoors and the cheerful voices of children.

Escape is a transition to the last section of the album, an arrival at pleasant and calmer memories.  The mind is no longer distracted and has returned to the center in An Ode To Fring, perhaps from halcyon recollections of East Anglia, Norfolk.  Rescue closes the album, and it is both the final state of slumber and the slow return to the conscious world.  The opening theme of the album is more broadly reprised like the rising sun not yet seen, but still a signal to an awakening.  Enjoy your travels, and the weather.

Photo Courtesy of Sound In Silence