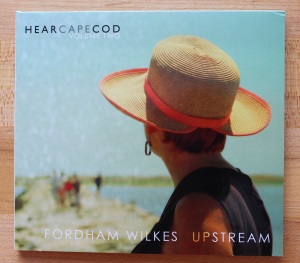 Since the middle of 2011, Berklee College of Music professor, percussionist and Blue Man Group alum, Steve Wilkes has been working on a project to capture the sounds of Cape Cod over a year and to map those sounds as an aural history of the region (the far eastern end of Massachusetts in the northeastern United States).  The project was funded in part by the Newbury Comics Faculty Fellowship.  The region has undergone many environmental and man-made changes, from rising sea levels and coastal erosion to residential development.  It was Wilkes’ feeling that the region is measured and analyzed in many ways (like bird population counts, temperature and sea levels), but there was yet to be a base-line environmental sound analysis examining animal, environmental and cultural activity in the region.

At this point, the project consists of 3 CDs: 1, a collection of regional sounds; 2, the sounds remixed by a number of musicians who will be familiar to many, and 3, a song-cycle inspired by the region at various times throughout the year (which also incorporates many of the environmental sound recordings and the detailed credit links give an excellent overview of the variety on-location recordings).  The album artwork evokes pleasant memories of worn edged blue-green beach-glass.

CD 1 is a sonic time capsule, and at first it reminded me of a number of sound effects and spoken word recordings of the 1940s and 50s, and for a brief moment, I thought I was hearing a snippet of the old records by Bert and I.  It also had the immediate effect of taking me back in time to the days when I summered on “The Cape” as a child with my parents in the early 1960s.  The documentation of the region also harkens back to some of the expansive sound archive work by Alan Lomax.  This CD chronicles the sounds of land, water and activities that mark the course of a year from a First Night Noise Parade to the calming summertime beach surf.  It closes with the reading of the poem Route Six by Stanley Kunitz (being the road that travels down the center of the “flexed arm” of Cape Cod, reaching out into the Atlantic Ocean).

Having lived in a beach-town region in nearby southern Connecticut, I am also reminded that a resort region like The Cape has two lives—the times when the summer-folk occupy and the off-season when only the locals remain.  The off-season is the time when locals can take long walks on the shore beaches and see very few people.  Life goes on in a different way after the tourists have left in the autumn.

CD 2 is a sensitively created set of interpretive remixes by many well known artists in the current electro-acoustic, ambient and electronic music communities (see list above).  The field recordings from CD 1 are delightfully co-mingled with the offerings from each of the artists (well documented at the web link also noted above).  I was immediately struck by the opening notes of the first track by Goldmund (Keith Kenniff), the piano melody being very reminiscent of Anthony Phillips’ Death of a Knight from Henry: Portrait from Tudor Times (from the album The Geese and The Ghost), before drifting into a dream-state with seaside, night-time crickets and Morse Code pulses.

Most of the remixes are by artists who have done work strongly connected with outdoor environs and water (as in the Flaming Pines label Rivers Home series), like Marcus Fischer, Taylor Deupree and Simon Scott (to name a few).  The character of this disc ranges from contemplative to glitchy (FourColor) to playfully rhythmic (as in Loscil’s remix).  The remix by Steve Wilkes includes the first HearCapeCod recording made in Truro at Corn Hill Beach in the summer of 2002.  The CD closes with a collaboration of FourColor and SoundSignal (Wilkes) and is the most melodic and rhythmic of the tracks of the album.  This CD forms a strong connection to the foundation provided by Wilkes’ research and recordings.  As much as I’m tempted to suggest that this CD be made available separately, after spending time with the entire set, it is actually a quite inseparable part of the whole.

CD 3 Upstream, is a song cycle by the duo Fordham Wilkes (Ginny Fordham: vocals, Steve Wilkes: drums with Crit Harmon: guitars and Keiichi Sugimoto: guitars) and is inspired by years of memories of time on Cape Cod and it is the most personal of the three discs.  Fond recollections of places run deep for many and they have different effects on people.  This is where the project transforms from being objective (CD 1) to the most reflective and personal (while avoiding sentimentality).

The album has a sense of welcoming and ease, enjoying summer breezes, wading in tidal pools, walking in sanctuaries or along beaches.  There is no heavy foreboding or hand-wringing of what was or could be; the feeling is that of the now and hopefulness, and Ginny Fordham’s voice brings a relaxing calm to the album.  Gates of Summer opens CD3 and is forms an instrumental and melodic transition from the last track of CD2.  The Language of Birds plays rhythmically with a juxtaposition and syncopation of the instrumentation and avian field recordings.

The ever-present drone of automobile traffic is also a reality of summers on The Cape (whether passing over the Sagamore or Bourne bridges before necking down to Route 6 or at the half-way point to Provincetown, in Eastham) and these sounds are merged with fleeting views to salt marshes in the pensive GP Road Resonator.  As in CD 1, there are songs of Land as well as Water, as in Dive Down and Upstream (as much a metaphor for returning to and rebirth of the area as it is the traffic on Route 6 that one is “swimming” against!).

CD 3 is also a reflection of CD 1’s A Year, The Cape in song over the course of a single circumnavigation of our Earth around the Sun.  As the album progresses through the summer and into the end of a year (June, Shifting Sand and Fog) it grows more contemplative with the advancing of the calendar, melding dreams with reality.  Each Spring many look forward the approaching time outside and then seemingly in the blink of an eye, Summer is over.  The album closes with The Message, an inspiration left in a voicemail, which ultimately is the beacon announcing the sense of place of The Cape that inspired the HearCapeCod project.

The release date (May 28, 2013) for this set is at the unofficial “gate of summer” season, just after Memorial Day weekend.  These albums will be available at: Booksmith Musicsmith, Orleans, MA: https://www.facebook.com/BooksmithMusicsmith , Muir Music, Provincetown, MA: https://www.facebook.com/muirmusic5 , The Cape Cod Museum of Natural History: http://ccmnh.org/, CD Baby: SoundSignals On CD Baby, iTunes: http://www.apple.com/itunes/  and Amazon.com: http://www.amazon.com/