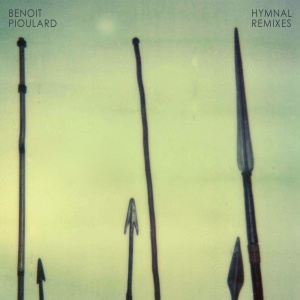 I want to note that sound quality and production are very important to me, almost as important as the music itself.  So, given that statement, please read this review carefully.  Comments seen as criticisms are not of the music or the writing, but largely on the choice of production methods and sound quality.  I think very highly of the music penned and played by Tom Meluch (in his guise as Benoît Pioulard).  With that in mind, please read on.

I’ve enjoyed Benoît Pioulard’s previous kranky releases as well as the more experimental vinyl EP Plays Thelma on Desire Path Recordings, so coupled with the early press accounts of Hymnal I was hopeful that it would be a great album…

I feel that there are many exceptional songs on Hymnal (Hawkeye, Reliquary, Excave, and especially Margin, and Litiya) along with some comforting drones (like Censer), but in general I feel there is a lack of presence in the recordings—they sound flat, out-of-phase and firmly entrenched in a claustrophobic mid-range (nothing at all like the sumptuous reverb of the intended muse “religious architecture”).  Pioulard’s songs on this particular album are lost in a limiting boxy haze.

I’m a big fan of lo and mid-fi recordings and some musicians do it so well; East River Pipe (FM Cornog), more recently Will Samson and especially (one of my favorite albums of 2013) Bryan Ferry’s The Jazz Age (recorded in monaural with Jazz-era microphones).  Granted, some artists and writers create works within strict limits and can be quite successful (shades of a single color, certain textures or excluding a specific vowel in a written work), but with all the praise I take a contrarian view on the technical execution of Hymnal.  The quality and depth of recordings matter to me, unless there is a stated goal for why sound must be altered so dramatically.

I learned recently of Benoît Pioulard’s other off-label work, such as his 2011 digital EP Lyon (and in support of how I think Meluch writes some great songs).  Have a listen to the gorgeous and unadorned song Tie:

It has some of the qualities of recordings by Nick Drake and Bert Jansch (think The Black Swan).  I’m certainly not advocating that Pioulard chooses between one recording approach or another, I’m suggesting perhaps a sound somewhere in the middle, with the vocals higher in the mix and a fuller sound.

Original songs can find new life in covers or remixes.  So, when Lost Tribe Sound announced this collection of Hymnal reinterpretations (by artists such as Loscil, Cock & Swan, Brambles, The Green Kingdom and William Ryan Fritch) I thought that some of the depth that I felt was missing in the original might be introduced or restored.

This is a really interesting collection, and the recordings in most cases have the clarity and sonic diversity that I had hoped for in the original album.

The two CDs are split loosely into two categories: 1) rhythmic with vocals and 2) more on the ambient side, largely instrumental.  After a couple of listens I was quite surprised that I found myself leaning more towards the feel and sound of the more actively engaging CD 1.

As with the original album Mercy (I’ll call it track 1.1) opens the collection and it’s a bit of an assault on the ears (the original being a full-on harmonium before the vocals enter), but in the remix version the harmonium is tamed and a slow march beat is overlaid.  The sound is far more spacious, as if entering a cathedral.  William Ryan Fritch’s remix of Margin (1.2) is an almost frenetic orchestration compared to the original and Zachary Gray’s version (1.9), which starts off quite stark with lone guitar and vocal and gradually the instrumentation and soundstage expands—I think both are quite successful, and in Gray’s version the vocals are clear as the song develops (makes me wonder all the more why Meluch chose to shroud such a great song).  Squanto’s remix of Excave (1.3) is a series of repeated fragments made into a rhythm and sounding very much like some of Peter Gabriel’s mid-career work.

The Green Kingdom’s and Cock & Swan’s remixes of Litiya (1.4) and Homily (1.5) are quite enchanting.  The sound of Litya softer, fuller and more comforting than the original—the soft electric guitar and cello overlays give the track such an easy feel, and Pioulard’s largely untreated vocals weave right in, so well.  I have to admit that Homily is one of my least favorite tracks on the original album and Cock & Swan have woven their unusual magic, making it an ethereal journey (supplemented with Ola Hungerford’s vocals) while maintaining some of the original grit, and I assume that the crisp nylon guitar overlay is Johnny Goss’s.  Brambles transformed Florid (1.6) into a (quite unexpected) “chill dance” piece—it has a languid vibe.  Field Rotation put Censer (1.7) into a time machine and it emerged from an old modular Moog during Tangerine Dream’s Stratosphere era.  The original version of Reliquary is furtive and mysterious, and Part Timer (1.8) stretched this concept further with his stark (and at time minimally orchestrated) interpretation.

The Remote Viewer’s version of Hawkeye opens CD2 (2.1) and its origins are deftly shrouded, and at first I didn’t care for it much, but it has grown on me—it’s delicately fragmented with some quirky treatments (very Boats-y!) and at times it sounds like Mark Isham’s early experiments from back in his Windham Hill label days (yes folks, I’m that old).  My two favorite tracks on CD2 are Segue’s version of Censer (2.2) and Loscil’s (at times, visceral) remake of Florid (2.4).  Curiously, Censer is given a gentle heartbeat, which despite the motion has a rather soothing effect to it.  The remix of Florid somewhat belies its connotation, elaborate in its sonic depth, but not ornate.

Widesky’s Knell is an expansive fragmentation of the cathedral bells of the original and then all is absorbed into a rather compressed package of the experience (kind of like a snow-globe)—it’s a bit edgy for my ears.  Sorry, but Radere’s version of Foxtail (2.5) just didn’t work for me—too strident.  James Murray’s Gospel (2.6) meanders and bends with a broad color palette and is a contrast to Window Magic’s version (2.9) that is narrower, more primary shaded.

Pioulard’s remix of his own track Reliquary  (2.7) shrouds the original even further; the furtive character is diminished—a curious approach.  Ruhe’s version of Margin (2.8) is an almost unrecognizable adaptation of the original with only the slightest of rhythmic and vocal fragments remaining—in kind of a trance beat.

Sometimes sequels or remakes are better than the original, and that’s how I feel in this case on the production side of things.  Despite my comments on the source material, I urge listeners to purchase a copy of Hymnal and judge for yourselves—some might disagree completely with my assessment on the sound quality.  I’ll continue to look forward to Benoît Pioulard’s future recordings.

I am always looking for new and interesting music, and often works with a message or a foundation.  Late in 2011, I came across a label from Sydney, Australia named Flaming Pines.  I first noticed an EP release by Marcus Fischer and then realized that it was part of a series entitled Rivers Home.  The first series consisted of 5 separate 3 inch CDs, each with works by a different artist (Marcus Fischer, Kate Carr, Field Rotation, Broken Chip and Billy Gomberg).  There was also a common theme to the CDs, and I immediately took note of the striking cover artwork.  Rivers Home (and its later Part Two with releases by The Boats, Seth Chrisman, Dan Whiting, Savaran, and All N4tural) “…celebrates the wonder of rivers at a time when many of them are particularly vulnerable.  Many of us dream about rivers, ride along rivers, take ferries along rivers and sit on river banks. This series is a musical exploration of the ways we influence rivers and they influence us.”  The founder of Flaming Pines it turns out is Kate Carr, whose work is also featured in the series.  Kate also produces the artwork for the covers.  I ultimately bought the entire set.  Many of Flaming Pines’ releases are mastered by Taylor Deupree of 12k. 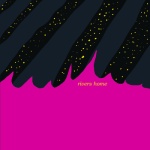 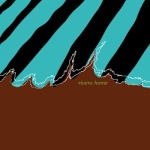 Recent releases include a split album by Kate Carr (Blue) and Gail Priest (Green), which is an exploration of sound and color.  The last track of each side serves as a transition to the other side of the LP, and the color references are subtle (as colors are muted at dawn and dusk), and reveal the natural world with field recordings and gossamers of acoustic and electronic instrumentation and effects.  The LP silences the distracting world around and reveals the many things missed in the background as the days and seasons come and go all too fast.  The LP is a co-production of Flaming Pines and Metal Bitch Recordings.

Just released in September is the next series of EPs on a theme, this time Birds Of A Feather, and the covers keep getting better!  The first two are the Black Woodpecker by Iran’s Porya Hatami and Great Northern Loon by Canadian Michael Trommer.  Carr notes of this series, “…the role of birds as muse, as musical guide and inspiration has been well documented in classical music, from Mozart’s pet starling to Beethoven’s birdsong filled Pastoral Symphony and Sibelius’s swan hymn to Messaien’s birdsong compositions.  Birds Of A Feather celebrates the role of birds in ambient music, and the beautiful fragility of birds more generally.”  Both of these EPs are deeply layered soundscapes with field recordings of the chosen birds and environs mixed with acoustic and electronic instrumentation that heighten the experience.  It’s like getting lost in the woods or paddling a canoe on a hidden lake.

As with Rivers Home, Birds Of A Feather will be a series of about 12 three inch CDs released as pairs in editions of 100 over the next year.  The next pair of CDs will be by The Green Kingdom and Darren McClure.

My favorite of the cover artwork thus far is the expressive Black Woodpecker.

The latest October release is a debut by Michael Terren entitled Bythorne, who lives in far western Australia in Perth.  In June of this year, he strapped his piano to a trailer and drove it 200 kilometers to a farm of his childhood.  There he recorded this EP of six compositions (Cureaking, These Ones, All Nine of Them, Midiology, Bythorne and Dardyboys).  The tracks echo the surroundings and ever-changing weather (from placid blue skies to sudden stormy weather in from the Indian Ocean) as well as the pastoral timelessness.  I get a strong feeling of the sense of place from the beautiful title track.  The sleeve is handmade and the EP is limited to 100 copies. 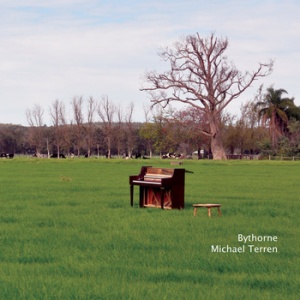