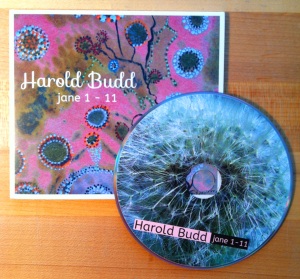 Harold Budd is not complacent and I am thankful that rumors of his retirement actually turned out to be false (he briefly tired of writing and recording).  He is (at 77) producing some of the most interesting work of his long and varied career.  In a way, he is like Frank Lloyd Wright was at about the same age when Wright was hitting his stride with highly original and innovative works like the Kaufmann House (best known as Fallingwater)—always exploring and seeking new edges.  Many might connect Budd’s work almost exclusively with solo piano pieces or his first collaboration with Brian Eno, Ambient 2: The Plateaux of Mirror, but his discography is remarkably varied, and including his joint releases, he has contributed to or been the solo artist on over forty albums since 1971.

The music alone on this album is divine, and even better there will be a DVD later this year including video collaborations with artist Jane Maru (who also produced the beautiful artwork for this album).  Earlier this year a version of the furtive and at times skittering Jane 9 was quietly released on youtube—it’s just a hint of what to expect from this album.

This is a work of contrasts; some tracks tease the senses (like the unexpected and at times shrill Jane 1 or sharp-edged Jane 5 or the visceral and ghostly Jane 7) and then the pleasurable counter-effects are later intensified as the music ebbs and flows (as in Jane 2, Jane 3, Jane 4 and the sublime Jane 8). Moods and spaces change, first grounded and up-close and then transform into expansive and liberating flights.  Budd is also exploring new sounds, instrumentation and treatments on this album (percussion [like chimes], electric piano, droning electronics, celeste and harp).  I won’t say why, but Jane 6 evokes some very pleasant childhood memories.  Jane 8 reminds me a bit of Anthony Phillips’ recent work Watching While You Sleep—deeply moving and one of those tracks I don’t want to end.  The expansive Jane 10 is almost a reverse overture, recapitulating variations of sounds and themes from the previous tracks, as if reliving the experiences.  To me, Jane 11 is the reappearance of the spirit of Jane 8—that which I didn’t want to end earlier, returned.  How did Budd know that this is what I wanted?

Harold Budd has an uncanny gift for expressing so much with so little, a poet who just happens to use music instead of words.