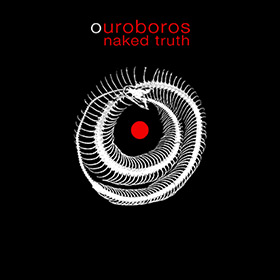 Ouroboros, the eternal consuming and replenishing serpent can be seen in the singular (nothing outside of itself) or in a broader societal context.  In this case, my interpretation is more of a collective urban consciousness.  This is an album of motion, not of rest, an album of experiences, not of contemplation (at least until after the intense experience is over).  It’s a fusion-brew of industrial, urban and cosmic sounds, and a potent follow-up to the 2011 album Shizaru (the lesser-known fourth primate of see, hear, speak, and DO no evil).

First a warning: Prepare your audio system (and your ears) for a workout.  Ouroboros will shake out the cobwebs.  The opening track Dust is the warm-up, the testing of the systems.  It’s a more keyboard dominant, brass punctuated bookend before entering the fuzzed sonic maelstrom.  It has the atavistic fibers of many eras, and I’m old enough to have been around for the many incarnations of King Crimson, Weather Report and other Jazz-Fusion, Progressive Rock variants, and it’s all there–the solid musicianship and the sometimes angst-filled drive.  There’s also a hint of Miroslav Vitous’s 1976 spacey funk inspired album, Magical Shepherd.

Next, place yourself in a traffic jam with an impetuous case of not-so-mild road rage (in the aggressive spirit of KC’s Neurotica, sans vocals), and that’s Dancing With The Demons Of Reality.  The pauses are the waiting at traffic lights, restoring momentary sanity, but tension builds with pressurized chromatics, electronics and percussion before subsiding.  Garden Ghosts is a respite; at first a progression of sonic fragments, a meandering prepared piano, percussion and fuzz-bass.  The trumpet is the roaming spirit joined by a languid beat, murky electronics and guitar background; ultimately it ends as a brass-teasing percussive danse macabre.

At the start of Orange it’s disguised as an atmospheric piece, a quiet evening perhaps—serenade with cornet, but then diverts quickly with syncopated rhythms (bass, guitar and keyboards reminiscent of Kazumi Watanabe’s work), before returning to the more sedate themes.  Right Of Nightly Passage is an instrumental recasting of the driving rhythmic “heat in the jungle” anagram.  Clustered horns interlace with the cadence of the frenetic scene.  The spirit of Miles Davis’s later more electronic work is channeled in Yang Ming Has Passed.  It’s a menacing and deeply rhythmic piece (sounding like it could be dock-side in a shipping yard) with traded riffs between bass, percussion and trumpet meshed together by a high-cover of electronics.

The heavy backbeat continues in the darkly raucous In A Dead End With Joe.  The trumpet soars and trills against the syncopated drums, electric guitar and keyboard phrases.  Neither I is the other keyboard-textured closing bookend of the album.  It displays some Far Eastern influences, and is more experimental and atmospheric with clustered brass, melodic percussion and roving piano before finding its beat.  By contrast to the rest of the album, it closes with a gentle yet furtive purity.

Ouroboros is an adventurous and deliciously brash album that reveals glimpses of the eternal and sometimes daunting cycle of existence from different perspectives.  Naked Truth is a sturdy, tight and vibrant quartet, and I’ll be very interested to see and hear where they take us next.