Improvisation is about taking risks, experimenting and responding to the immediate results.  It is the outcome of the instantaneous transition from thought to motion, and then to sound.  It sometimes takes practice, and it requires chemistry between the artists; the kind of vibe evident between Marcus Fischer and Ted Laderas (aka The-OO-Ray).  Music can yield a far timelier reward compared to other slower [art] forms, like in architecture or science, where the results of research and collaboration can often take years to behold.

This has been a busy year for Marcus Fischer with at least five published recordings, touring, and new projects in the works.  I’ve certainly enjoyed all of them, solo and collaborative.  It is thanks to Fischer’s work that I have become familiar with Ted Laderas (The OO-Ray: self-professed on his Twitter bio “Half Scientist, Half Cellist, All Shoegazer”) and his electro-acoustic chamber-drones.

Tessellations is the result of a series of long-form improvisations between the Fischer and Laderas.  It was commissioned by the Optic Echo label in 2011.  The instrumentation is largely stringed (acoustic and electric guitars, cello, lap harp) with percussion, loops, processing and minimal synthesizers.  The album has a dynamic richness with a combination of soothing observation and introspection.  I also appreciate that this is an album of largely non-electronic instrumentation, not necessarily a rejection of sequenced analog or digital electronics, but a return to earlier tangible instrumental roots, and a sense of the ageless.  It kind of takes me back to some of Kraftwerk’s oft-forgotten earlier works from Kraftwerk 1 and 2, and Ralf and Florian; like the guitar portions of Tongebirge (Mountain of Sound) from 1973. 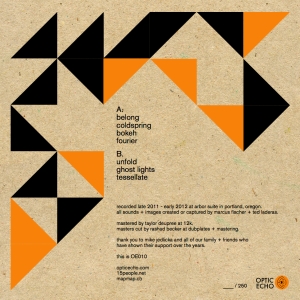 The album opens with belong, rising like the sun on a dewy morn; crisp and hopeful with a gentleness that avoids any sense of melancholy.  Stark and mysterious is the ambience of cold spring with OO-Ray’s cello seeking the edges, and hints of Harold Budd’s Boy About 10 from the album By The Dawn’s Early Light.  The largo metronomic of the bass line maintains the focus of bokeh as cello, keyboards and other instrumentation blurs the musical depth of field.

The shifting of sounds, interlocking, matching and then contrasting (much like a moiré pattern) is the sense presented in fourier, which is perhaps the most densely packed and expansive of the tracks.  By contrast, unfold is perhaps the most peaceful track on the album, a private [waterside] contemplation with gently flowing cello, meandering lap harp layered and a soft droning veil.  Then, the mystical and shimmering reverb of ghost lights emerges, and is reminiscent of the recent Unrecognizable Now album (Fischer’s collaboration with Matt Jones, KESH018) Two Rooms, with shifting chords and bowed strings (and has some of the sound I noted earlier in Tongebirge).

tessellate is the longest (about 10 minutes) and most subtle of the tracks on the album (titled tessellation on the download).  It has the most nuanced transitions, with Fischer and Laderas trading themes and responses, and weaving phrases back into the fabric of the piece.  It brings the LP to a placid close.  *music for caverns is the bonus track with the digital download, and is a warm postlude to the day that started with belong, and in some respects is similar to the closing tracks of Eno, Lanois & Eno’s album,  Apollo: Atmospheres and Soundtracks—one of my favorite of Eno’s collaborative works.

Marcus Fischer + The OO-Ray have deftly assembled in their collaborative improvisational work both a cohesive sonic realism, and impressionistic vision with a timeless authenticity.