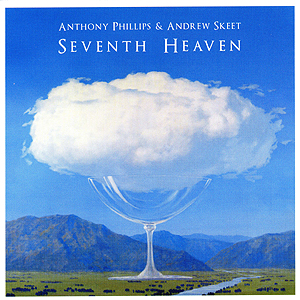 When many think of the music of Anthony Phillips, often they first remember his association with the early days of the band Genesis, even though it has been more than forty years since he left that band.  After formal music training in the early 1970s, Ant did continue to collaborate with Mike Rutherford on The Geese and the Ghost and Smallcreep’s Day, in addition to Ant’s other solo works such as Wise After The Event and Sides in the mid to late 1970s.  Ant has released about thirty albums to the general public, in addition to the many compilations of his extensive catalog.

The younger Andrew Skeet has worked as an arranger and orchestrator for George Michael, Suede, Unkle, Sinead O’Connor and Hybrid.  Since 2004 Skeet has worked with Neil Hannon of The Divine Comedy on three albums as musical director, arranger, and playing piano as well as touring throughout Europe.  Andrew Skeet also established the music production company Roxbury Music with Luke Gordon (former Howie B collaborator) and together their music has been featured in film, television and commercials: The Apprentice, Dispatches, and Banged Up Abroad.  Skeet has also orchestrated and conducted scores for The Awakening and Upstairs Downstairs.  The album The Greatest Video Game Music was produced in 2011 by Andrew Skeet along with the London Philharmonic Orchestra and has been one of the most successful classical releases in many years.

Ant and Andrew crossed paths when Universal Publishing Production Music commissioned Ant to write a collection of cinema-related music for UPPM’s  Atmosphere label.  Much of Ant’s music career for the last twenty or so years has been writing what is often referred to as “library music” or stock music composed for use in films, television or commercials in addition to other commisioned and self-produced works.  Periodically Ant has collected these tracks, edited and in some cases re-recorded them for his Private Parts and Pieces, Missing Links or other album releases that are available to the general public (primarily through the Voiceprint and Blueprint labels).

It is always of particular interest to me to dig through Ant’s music to find the roots of some of his library work.  I do miss the days of his more rock-oriented albums and singing, but recognize that getting that kind of work published these days is not easy or commercially viable.  Ant goes through periods where his work is more keyboard oriented, but in 2005 he released a gorgeous double CD entitled Field Day filled with varying acoustic guitar work written and recorded from 2001 to 2005 (the exception being a re-recording of his 1975 piece Nocturne from PP&PP2 Back to the Pavilion…one of my favorite albums of his earlier solo works).

Field Day forms the basis for portions of Seventh Heaven where some of the solo guitar works have been orchestrated in addition to pieces that Ant and Andrew co-wrote later.  Ant is credited with having written ten of the thirty-five compositions. The orchestrated pieces from Field Day that I can identify include: Credo, Nocturne, River of Life, Sojourn, Rain on Sag Harbour and the exquisite Kissing Gate.  Each of these pieces is lightly orchestrated and perfectly complements the original to heighten the sentiments of the composition.

For fans of Ant’s prog-rock work this album might be a stretch, but if listeners enjoyed the album Tarka (the orchestral collaboration with Harry Williamson released in the late 1980s) then I think this Phillips and Skeet collaboration will be well received.  The orchestration and recording is lush yet is not overdone.  Many of the compositions are quite visual and evoke certain moods or a sense of place.  The orchestrations vary from solo instrument (guitar, piano) to full orchestra, chamber or ensemble.

There are some really gorgeous tracks, from the opening of CD1 Credo In Cantus (based on Ant’s Credo from Field Day) and the transition into A Richer Earth and the dramatic Under The Infinite Sky.  Grand Central evokes a sense of motion as in a view taken from the station in New York on a busy morning.  Desert Passage by contrast is a stark and dramatic piece based around (I think) a mandocello with Middle Eastern themes along with woodwind soloist (and collaborator from PP&PP6 New England) Martin Robertson.

CD2 opens with an instrumental reprise of Credo In Cantus and ties the two discs together.  A spirited orchestral version of Sojourn follows and then the mysterious piano of Speak of Remarkable Things links to the poignant and beautiful guitar Nocturne from long ago—it has an ageless quality to it.  Long Road Home has the image of a beginning (and it is quite cinematic in its breadth) with first full orchestra followed by solo woodwinds and closing with piano.  The Golden Leaves of Fall continues a similar piano theme and to me the two pieces seem strongly connected.  Mid-disc is Old Sarum Suite in five short movements and it has a brilliant range of instrumentation and themes, and shows the versatility of Phillips and Skeet’s collaboration.  It has an historic feel to it similar to Henry: Portrait From Tudor Times from “Geese”.  CD2 closes with an introspective piece Forever Always, (a common thread, reflection, in Ant’s own work since “Geese” Collections/Sleepfall: The Geese Fly West).

There are extensive liner notes with the CDs as well as photographs of the recording sessions with the orchestras and biographies on the soloists and principal players (John Parricelli, Belinda Sykes, Martin Robertson, Lucy Crowe, Paul Clarvis and Chris Worsey).  The works were recorded in three phases (from 2008 through late 2011), with the City of Prague Philharmonic Orchestra and Choir in Prague, then with string section at Angel Studios and then some tracks were re-recorded at Abbey Road along with recordings at Ant’s studio.  The only quirk that I noticed is that CD2 actually has seventeen tracks, although it skips from 16 to 18 in the liner notes (typo!).

This entry was posted on May 24, 2012 by wajobu. It was filed under Uncategorized and was tagged with Ambient, Andrew Skeet, Anthony Phillips, Daily Audiophile, ElectroAcoustic, Genesis, HifiZine, Instrumental, Music, Orchestral Music, Prog Rock, Progressive, Review, Rock, Seventh Heaven, Tarka, The Geese and the Ghost, Voiceprint Records.